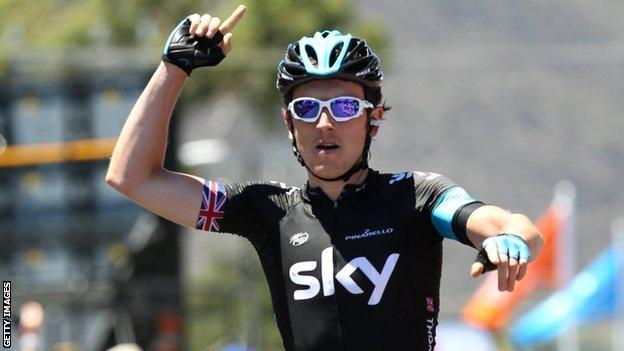 Britain's Geraint Thomas says it would be a dream come true if he were to win the Tour of Flanders on Sunday.

The second of the season's monument races is celebrating its 100th anniversary and Thomas believes that he is well suited to the famous race.

"It's massive. Since the Olympics last year it's the one race I've been thinking about," Thomas said.

The 256km race, which starts on the outskirts of Bruges and heads towards Oudenaarde, features 17 short climbs and 17 cobbled sections.

Only one Briton has won the Tour of Flanders before, when Tom Simpson triumphed in 1961.

Now Welshman Thomas is bidding to double that tally and is one of the riders leading the Team Sky challenge in the classics, having switched his attention to the road after winning a second Olympic gold on the track in the team pursuit at London 2012.

"In cycling terms it's one of the biggest one-day races, one of the 'monuments' as they call it, it's got that massive history and prestige," Thomas, 26, told BBC Sport Wales' The Back Page programme.

"It's just one of those races that you grow up dreaming of being a part of, so to be on the start line with a chance of getting on the podium is massive.

"It's just such a hard race. We did the reconnaissance today [Friday], we did a few of the climbs and things and it's going to be grim but exciting.

"It definitely suits me more than the Paris-Roubaix which we've got next week, I think the climbs suit my attributes a bit better.

Defending champion Tom Boonen is bidding to win the race for a record fourth time but has accepted that he is short of form.

The Belgian, who rides for Omega Pharma Quick-Step, said: "I think I am able to [win] but we will see.

"I am not the strongest guy this season. I am not in my best shape but everything is possible. I have won races with less condition than this."

Slovakia's Peter Sagan and Swiss rider Fabian Cancellara, who won the race in 2010, are expected to be among the main challengers.

Sagan, 23, is in excellent form having won last-week's Gent-Wevelgem one-day race and two stage victories in the Tirenno-Adriatico and one more in last week's Three Days of De Panne.

However, the Cannondale rider is aware of the threat that Cancellara poses.

"We will see during the race what Cancellara and the other favourites will do," he said.

"The experience of Cancellara is an advantage because he knows the route and the race but I feel good and I am calm after the results that I have here in Belgium."

Cancellara is also riding well, having beaten Sagan into second place to win the one-day E3 Harelbeke race by 64 seconds and he is hopeful that his experience and strong Radioshack team will help him pick up a second Tour of Flanders title.

"It is important that I can go to the start line and say to myself that I have done what I had to do," said the 32-year-old who fractured his collarbone during a crash in last year's race.

"It is important for me to be calm and relaxed and not make mistakes as I know I can do in this kind of situation.

"But with this experience that I have and with the background of the team, I think I am more than race ready."

*Listen to The Back Page every Saturday morning on BBC Radio Wales from 08:30.