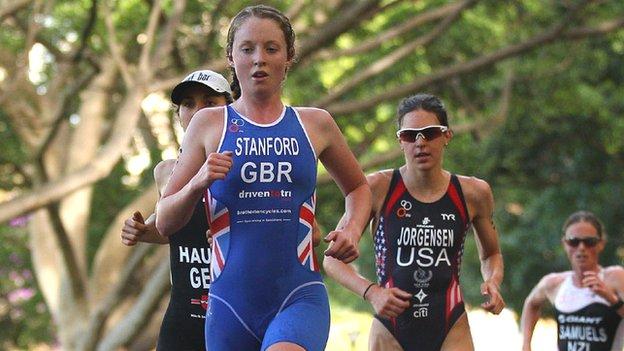 Non Stanford claimed her first title as a senior when she won the European Cup triathlon in Portugal.

The World under-23 champion, from Swansea, produced a commanding run to comfortably win the race in Quarteira, Portugal.

"I'm absolutely delighted, it's my first win in a senior race and that's nice. It's a good way to start the season," the 24-year-old said.

Stanford next competes at the World Series in San Diego from 18-20 April.

"I had a really strong swim which is a really big breakthrough," added Stanford.

"I felt really comfortable all the way through. I felt strong in the run and it bodes well for the rest of the season."

Stanford won the World under-23 title in Auckland in October 2012.

Her transition from age-group events to the senior circuit will be put into sharper focus is San Diego, where she acknowledges the competition will be much tougher.

But Stanford is confident.

"Looking at my run splits, they compare well with what the girls who are at the top of the field in the World Series are doing," she said.

"Obviously it's a different race - the bike [stage] will be harder and you've got to be there [in contention] for the run.

"It's hard to make direct comparisons, but it looks good and I can go there with a bit of confidence and just see how it goes."

Stanford says she has clear targets for the season, with her win in Portugal just the starting point.

"The main objective will be to qualify for Glasgow for the 2014 Commonwealth Games.

"The World Series will be there as well and I'd like to do quite well and to have a top-10 finish overall in the series would be fantastic - and a really good stepping stone up from the under-23 level up to seniors."