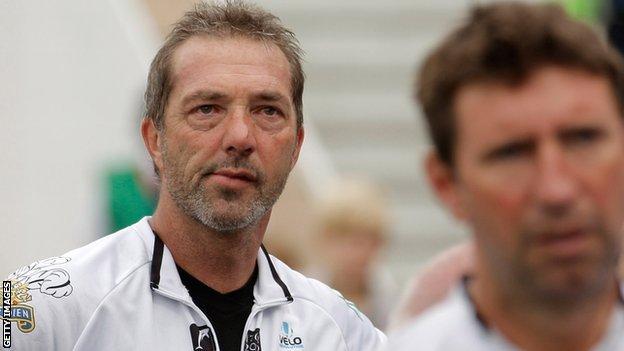 Matthew Maynard has ended his spell coaching in South Africa, saying he needs time away from the game after dealing with the death of his son Tom.

Former Glamorgan coach and England assistant Maynard is to return to Wales after turning down an offer to remain with Nashua Titans for two more years.

"I just needed some time away from the game," said Maynard.

"It's all been extremely tough, but I'd committed to coming over here [South Africa]."

But ex-England batsman Maynard will not return there in the immediate future.

He said: "I did enjoy my time here, but I needed to get myself sorted out so I'm just going to take a break away from cricket and see what happens."

He does not believe a return to Glamorgan is ever likely, but added: "I've got a lot of good friends down there and hopefully I'll catch up with them over the summer."

Maynard also ruled out a job elsewhere in British county cricket, for the short term at least.

Maynard admits that concentrating on the game has helped him get away from events surrounding Tom's death and the subsequent inquest.

"It's more the time away from the team that it's very tough," he said.

"When you're with the team you've got to work and you just get on with things.

"I know I've not been the same coach this year so I want to see in time whether I get that back or not and I've got to find something else to do now."

In the short term that is likely to be helping out with fund-raising efforts to benefit young players and help educate them in avoiding the problems that affected his son.

"It's going to be quite busy with the [Tom Maynard] Trust and there's some PCA (Professional Cricketers Association) stuff with the Benevolent Fund.

"But ultimately I'll have to get a job at some stage so I'll see what's out there when the time comes."