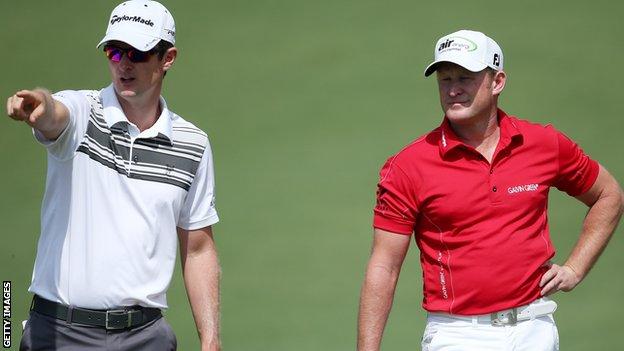 Jamie Donaldson said his first experience of "amazing" Augusta lived up to his high expectations as he prepares to make his Masters debut.

But a practice round with Ian Poulter and Justin Rose on Monday also left the Welshman, 37, in no doubt as to the difficulty of the task at hand.

"It's a tough golf course and the putting is brutal," said Donaldson.

"You've got to be in the right places otherwise you have no chance. It's like putting on the roof of a house."

Donaldson secured his invitation to play in golf's first major of the year by finishing inside the top 50 in the world rankings at the end of 2012.

Welshmen at Augusta in 2013

Victory at the Abu Dhabi HSBC Championship in January, where world number one and two Tiger Woods and Rory McIlroy missed the cut, then propelled him to a career-high ranking of 29.

His form has dipped since, though, and he failed to reach the weekend rounds at last week's Masters warm-up at the Texas Open on the PGA Tour.

"My form has been up and down," admitted Donaldson, who finished in a tie for seventh in his first appearance at the US PGA in 2012, "but I peaked that week in Abu Dhabi and you never know.

"Like any week, I'll go there trying my best to win the tournament.

"It's a case of preparing and getting ready as you normally do at any other tournament and hope that's enough to set you on your way to perform to win."

Should he walk away with the coveted Green Jacket on Sunday, Donaldson would be the first debutant winner since American Fuzzy Zoeller in 1979, and only the fourth in the event's 77-year history.

And having practised with title contenders in Poulter and Rose, Donaldson will continue his Augusta education by playing with two past champions in Woosnam (1991) and Sandy Lyle (1988) before Thursday's opening round.

"I was bending the ear of Ian and Justin because they've played here many times and there are some holes that are musts in terms of where to hit it, where not to hit it," revealed Donaldson.

"I've got plenty of things written down. I'll pick the brains of Ian and Sandy as well and take the advice I've been given and use it to play good golf this week."

Donaldson has taken the hard route to Georgia after a stuttering start to his professional career saw him lose his playing privileges on the European Tour in 2006.

He has remodelled his swing and improved his core strength to combat a back condition, and freely admits he doubted whether he would ever make it to the Masters.

But after having his first taste of a tournament synonymous with the game's greatest golfers, Donaldson is determined this will not be his last trip down Magnolia Lane.

"I've been watching it on TV for a long time now so the fact that I'm here is very exciting," he said.

"Just to hit it off that first tee was pretty special. It's incredible, better than what you can imagine. It's amazing. It's a beautiful, stunning golf course."