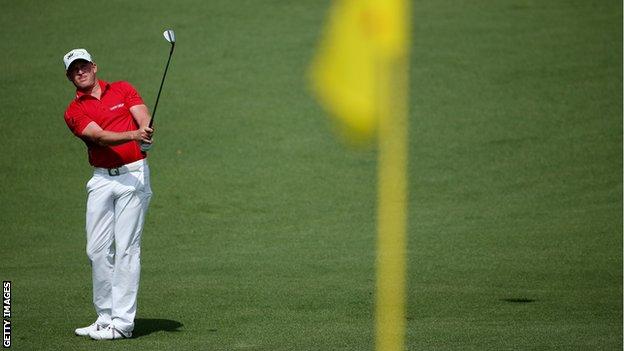 Jamie Donaldson will make his Masters debut on Thursday, giving Wales two competitors in the Augusta field for the first time in nine years.

The 37-year-old secured his invitation by finishing inside the top 50 in the world rankings at the end of 2012.

He will join Ian Woosnam, who is invited to play each year having won the tournament in 1991 and will be making his 25th appearance in total.

"It's going to be a tough week," Donaldson conceded.

"But if the course suits my eye and I play great you never know what's going to happen.

"I'm not putting too much pressure on myself but I'll be going through my normal procedures and doing the best I can."

Donaldson's victory at the Abu Dhabi HSBC Championship in January propelled him into the world's top 30 for the first time in his career.

His form has been "up and down" since, he admits, his tied-seventh finish at the 2012 USPGA Championship proved he has the appetite for the major stage.

"It's nice to say there's another Welshman playing," said Woosnam, whose withdrawal with a back injury in 2007 left Bradley Dredge to make his debut as that year's sole Welshman.

"Jamie's played some great golf recently and it's been great to be able to pass on a bit of experience."

While Woosnam relishes returning each year to the scene of his only major triumph, the 55-year-old has found the undulating course to be an increasingly strenuous challenge.

Back problems make completing the course a minor victory, and a lack of competitive golf adds to the difficulty.

Woosnam has failed to make the halfway cut in 11 out of this last 12 outings, and arrives at Augusta having not played tournament golf since December.

"It's my own personal battle to make the cut now," he said. "Over the last few years there's only one thing that's been letting me down, and that's my putting.

"If I can putt a bit better I've got a chance."

Woosnam will be in the third group out at 13:22 BST when play starts on Thursday, alongside England's David Lynn and American Kevin Na.

Some three hours later, Donaldson will stand on the first tee for the first time with Mark O'Meara, the 1998 champion from America, and Scotsman Martin Laird.

Woosnam well remembers his Masters debut in 1988, when he missed the cut, and said nerves will inevitably be a factor for his fellow countryman.

"Everyone will be feeling some nerves, it's a just a question of trying to control them and the adrenaline," he said.

"It's a pretty wide-open fairway on the first and you've just got to stand there and enjoy the moment."

Tiger Woods is favourite to collect a fifth Green Jacket and win his first major title since 2008. No British player has taken the prize since Nick Faldo in 1996.