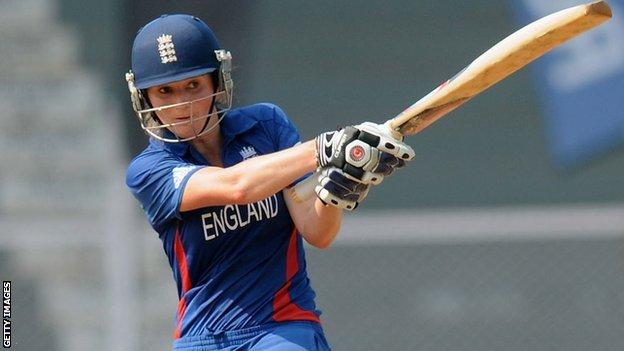 England women's cricket captain Charlotte Edwards would like to see the team play a match at Cardiff's Swalec Stadium.

Glamorgan's ground hosted the opening Ashes Test match in 2009, but has yet to stage a women's international.

"I'll have a word back at Lord's to see if we can get some international cricket down here," said Edwards.

The 33-year-old Kent player was in Wales promoting the Chance to Shine schools cricket initiative.

Edwards believes an England match would help raise the profile of the women's game in Wales, and help encourage more participation.

"It would be a boost the country needs to keep the interest in women's cricket. It's a lovely ground as well," she added.

Edwards was impressed by the standard and enthusiasm of girls who attended a series of training sessions in South Wales on 16 and 17 April.

Chance to Shine is an England and Wales Cricket board-backed charity aimed at promoting cricket in schools.

"From what we saw there's some great talent coming through," said Edwards.

And she believes there are some Welsh players fans should keep an eye out for in future.

"I think Gwenan Davies is the [best] from Wales at the moment who's up at Loughborough University. I've heard good things about her," she said.

"[And] a young girl called Anwen Morgan I think is someone we need to look out for, she's only 15 years of age.

"There's a great amount of talent here and they [Wales] are doing really well in the county championship as well so I'm sure Wales has got a great future."