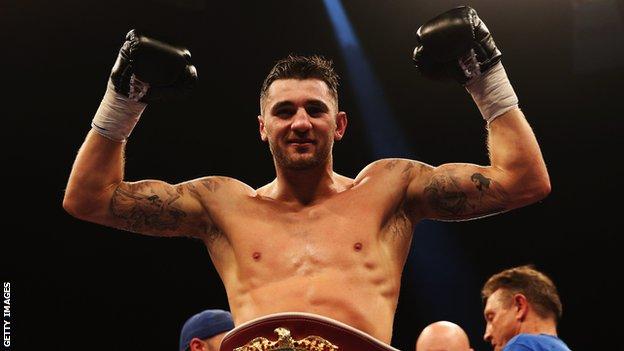 Nathan Cleverly says he is ready to step up a level in his career and test his credentials by unifying the light-heavyweight division.

Cleverly made a fifth defence of his WBO title with a landslide points win over Robin Krasniqi at Wembley Arena.

"I want fights that test me and that's the elite fights now - Hopkins and those guys," he said.

"They're technically brilliant and they can answer my question - am I an elite level boxer or am I just a world champion?

Hopkins, the 48-year-old IBF light-heavyweight champion, has previously said he would be interested in a unification fight with Cleverly this summer.

Cleverly registered his 26th victory by outclassing Krasniqi, who refused to go down despite taking some heavy blows and was awarded only one round by one of the three judges.

"He was hurt a lot of times, but wasn't quite ready to go so I had to go back to Plan A and box," Cleverly said.

"I felt good in there and I'm pleased with the performance, it was a nice boxing display. He was tough.

"At this level it's important to break your opponents down because these are world level fighters, 12-round fighters who are very tough, so you can't be gung-ho and reckless."

"I think 2013 is a chance now to stay active and push for the big fights," Cleverly added.

"I'll keep active, keep the rust away and try and unify this light-heavyweight division. 2013 could be the year to do that. Next could be America in July."