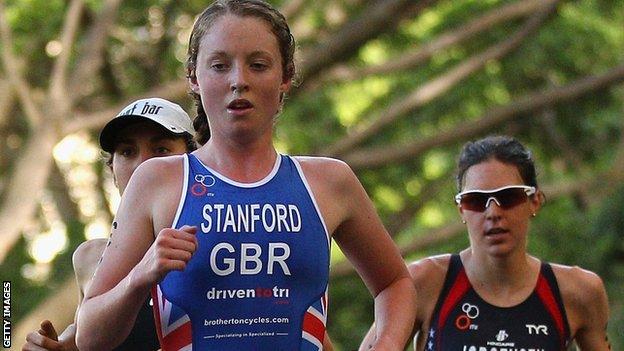 Stanford won her maiden World Triathlon Series event in Madrid on 1 June and had targeted the European Championships in Turkey on 14 June.

The Swansea athlete has told BBC Sport Wales she does not want to potentially undermine her World Series bid.

"It was a really hard decision and one that we didn't make very quickly," said Stanford, 24.

"It was difficult, but hopefully it will pay off towards the end of the season.

"I'm pulling out of the Europeans as a precautionary measure, really.

How the World Series works

"The last couple of weeks have been really tough and there's a lot that goes with winning a major event for the first time.

"All of a sudden there's a lot more pressure to deal with, a lot more media attention.

"I've also moved house this week so it's been a really, really crazy week.

"The Europeans is only a week away so me and my coaches... decided it's for the best from a health point of view and keeping the rest of the season in mind as well.

"I don't want the situation like last year, where I ended up with chronic fatigue [syndrome], again, because I've overdone it."

Stanford's victory in Madrid, in a time of two hours four minutes and 39 seconds, followed wins in the opening round of the 2013 French Grand Prix series in Dunkirk, and the European Cup in Portugal.

The win helped her climb 13 places from 18th to fifth in the world rankings.

But the win on a notoriously demanding Madrid course took its toll on the former Under-23 world champion.

She wants to be in the best possible condition for the next leg of the World Series in Kitzbuhel, Austria, on 6 July and the following three races, culminating with September's Grand Final in London.

"We do so much travelling - it's not just the racing itself that's demanding," added Stanford, who trains in Leeds as part of the British squad.

Read Non Stanford's first column, written ahead of her withdrawal from the European Championships, for the BBC Sport website here.