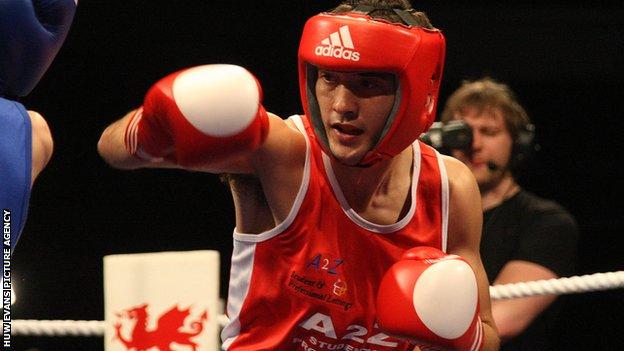 European amateur champion Andrew Selby will not be allowed to box for Wales at the 2014 Commonwealth Games in Glasgow.

The flyweight, 24, has signed up to a new professional boxing system which maintains his Olympic eligibility.

Selby will fight in the International Boxing Association (AIBA) Pro Boxing next year, and will be allowed to compete at the 2016 Olympics in Rio as well as any qualifying tournaments.

But the contract makes no provision for his release for the Commonwealth Games.

"With APB [AIBA Professional Boxing], AIBA is offering boxers an innovative opportunity to turn pro," the International Boxing Association said in a statement.

"Boxers will get the unprecedented opportunity to compete in a pro-style individual competition - APB - whilst retaining their Olympic eligibility.

"This will bridge the gap between open (amateur) and pro boxing as it is proved to be the best way to bring the sport of boxing back to a mainstream position.

"At the same time, introducing this new mechanism, AIBA will help to bring new faces to the AOB [AIBA Open Boxing] competitions, giving room for new talents to compete in national championships."

The 24-year-old won silver at the 2011 World Amateur Boxing Championships and also competed at London 2012, where he missed out on a bronze medal after losing to Cuba's Robeisy Ramirez Carranza in the quarter-finals.

He also represented the British Lionhearts in the World Series of Boxing tournament during the 2012-13 season.