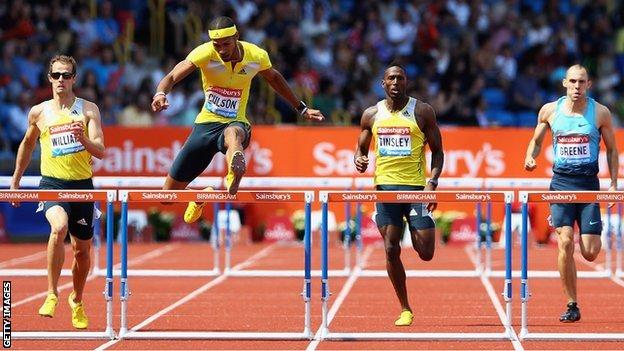 Dai Greene continued to struggle with his 400 metres hurdles form at the Diamond League meeting in Birmingham.

had a chance to prove a point after his Olympic disappointment, as all three medallists were present at Alexander Stadium.

Instead it was fellow Welshman Rhys Williams who seized the moment.

Williams clocked 48.93 seconds to finish second behind Javier Culson, with Michael Tinsley third and Greene back in fifth place in 49.55.

Greene still finished ahead of reigning Olympic champion Felix Sanchez, who was off the pace in 49.68, but the Welshman was left scratching his head.

"It's a bit worrying that I seem to be getting slower as the weeks go by, so I don't know what's going on," Greene said.

"It's not fun really. I don't really know what's wrong, so I'll have to go back and speak to my coach and see what's going on with me."

In contrast, Williams was buoyant as he continued his good form this season: "I feel I can run a quicker time, but there are a lot of positives.

"I'm indifferent to beating the reigning world champion - I was just considering myself.

"The British Championships are the next thing I'm looking towards, a British crowd is amazing."