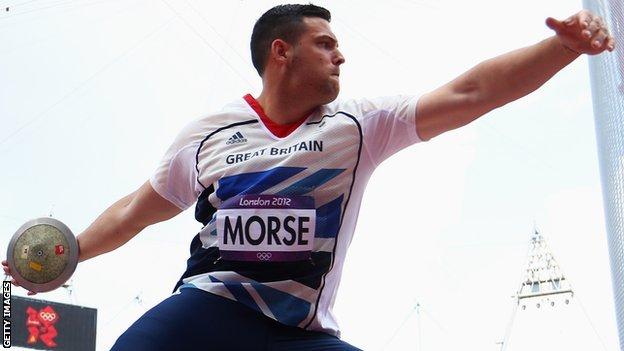 Discus thrower Brett Morse believes Britain will not be dragged into the drugs scandal that has seen sprinters Tyson Gay and Asafa Powell fail tests.

He added: "It's kind of against our morals, really, to cheat in the UK."

As in August, Morse will not have the chance to watch his favourite sprinter Powell.

The US Anti-Doping Agency has told Gay 30, the joint-second fastest man ever over 100m that his A sample from an out-of-competition test in May was positive.

MORSE ON HIS NEEDLE FEAR

In Daegu [2011 World Championships] I kind of went white. I nearly passed out, but I'm used to it now

But Morse says UK Anti-Doping's actions in athletics "fills him with confidence" that he is competing on an equal footing.

He added: "It's very disappointing. My favourite sprinter in the world to watch is Asafa Powell so when I heard that - I'm not really a massive sprints fan, I'm obviously more of a throwing fan - but I was gutted, really.

"And it's just sad because in a way I'm happy, but I'm also sad.

"It's sad to see there's still people cheating in 2013. I thought that was kind of behind us.

"But I'm also glad that people are getting caught.

"It fills me with confidence knowing that I'm competing on a level playing field with others because these are big athletes getting caught as well.

"There's always a danger [of a British athlete testing positive, but] the good thing about Great Britain is we have an amazing drug-testing system.

"Me personally, I'm not like Mo Farah or Jessica Ennis-Hill. I'm not one of the top, top elite guys and I get tested a lot.

"So they must get tested a lot more than me.

"It's kind of against our morals, really, to cheat in the UK, but I don't know; hopefully Usain Bolt can come and run something stupid again [in Moscow] and no-one will give a damn about those people taking drugs and that will be the talk of the world champs."

Morse says he has had to overcome a fear of needles to undergo blood tests, including at the 2011 World Championships in Daegu.

He added: "I've been blood-tested seven or eight times this year already; urine tested a few more times than that.

"But every time I've been blood-tested I've been urine tested at the same time as well.

"Sometimes it's a nice wake-up call at 07:00 in the morning, but I'm all for drug-free sport so I'm not too bothered by it.

"It was not nice at first because I don't like needles so to get blood-tested was a bit scary.

"In Daegu [2011 World Championships] I kind of went white. I nearly passed out, but I'm used to it now."