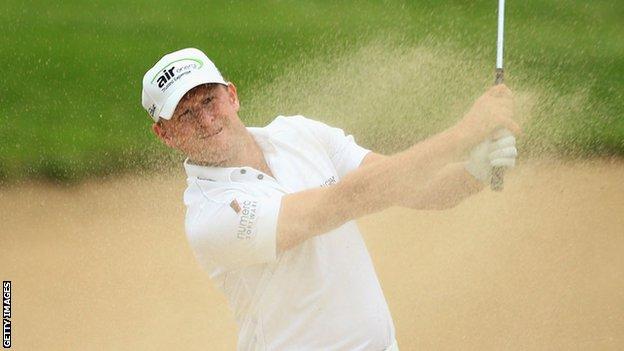 Welshman Jamie Donaldson says he is looking forward to the old school challenge of the Muirfield course in The Open.

He believes the combination of hot, dry weather and punishing rough will make for demanding conditions.

"It's awesome, the course is in perfect shape, and it's great to be here," said Donaldson.

"But you have to keep it in play. Hit it in the thick stuff and you are in trouble."

Donaldson knows what it's like to win over a links course, having claimed the 2012 Irish Open at Royal Portrush.

But he believes the continuing dry weather could make Muirfield an even bigger challenge than usual.

"The greens aren't that quick now but they're going to be polished, brown and fast by Sunday.

"And the course is getting firmer each day so it's going to be a proper old school tournament - lots of irons, not many drivers.

"Anything that just dribbles off the fairway and into that second cut is possibly dead.

"Whether you like links golf or not you've got to hit the ball in play and you know I've done that pretty well the past couple of tournaments I've played in.

"I did it really well in France and I've done it pretty well so far in practice so I just need four days of that."

Donaldson has enjoyed his best 12 months in the game, finishing 2012 ranked among the top 50 golfers in the world.

And victory at the Abu Dhabi HSBC Championship in January propelled him into the world's top 30 for the first time in his career.

In April, the 37-year-old from Pontypridd made his debut in the US Masters in Augusta.

However, The Open still holds a special place in his heart.

"It's an awesome event, it's the best event we play in," he said.

"Great crowds, great field. It's the main event that we play in as professional players."

At the other end of the scale amateur Rhys Pugh, also from Pontypridd, is playing at his first Open Championship.

The 19-year-old earned his entry by winning the European Amateur Championship in August 2012 and has set himself modest goals at Muirfield.

"If I just do my thing then the results will take care of themselves," he said.

The third Welshman at Muirfield this week is West Linton professional Gareth Wright who came through a sudden-death play-off in local qualifying at North Berwick near Dublin to earn his place.