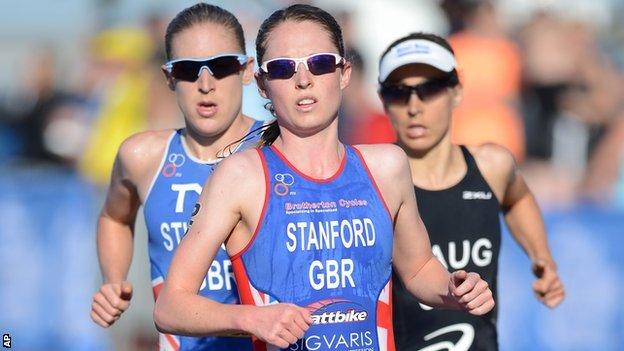 Following her BBC Wales Sport columnist Non Stanford reflects on her lucky escape from serious injury and the 24-year-old assesses her prospects for the remaining ITU World Series events in Stockholm and London.

The crash in Hamburg on the Sunday was, to be honest, completely my fault. We were on the bike and heading out onto the second lap of two.

I was hugging the inside of the course because it's the shortest line and I glanced backwards to see if I could see the other girls.

I have got very limited use of my right arm at the minute but I was planning to take a few days off this week anyway, just as a mid-season break

Unfortunately I veered off slightly to the left and hit a roadworks bollard, which was obviously quite sturdy so I didn't come off too well from it.

I literally crashed head-on into the bollard and went over the handlebars, and I think my bike did a few flips and ended up a long way down the road.

My back and my right arm took the brunt of the fall so I'm really fortunate not to have broken any bones, I'm just a bit battered and bruised - the medical team here are fantastic and looked after me really well.

It could have been a lot worse: a few people who saw the accident thought I would have done a lot more damage, so I can just be thankful that I didn't do too much.

Luckily I didn't take any real impact on my head, obviously I had a helmet on so that helps and most of the impact went through my back - so I've got some nice bruises there, some good war wounds at least.

I had a lot of pain in my lower back and my arms so I was a bit worried that I'd fractured my pelvis and my arm and my wrist, but luckily the X-rays and scans didn't show anything.

I count myself lucky because that could have been season-ending.

My biggest frustration is I felt I let the team down, because we were doing so well at the time and I was really disappointed about that.

We were hoping to win and we were on course for that... yes, it was down to me making a silly error.

A lot of people crash in races but I never wanted to be one of those people who did it, but I guess accidents happen.

I'm upset about it but I can't dwell too much on it and we've got to look on to the next race really.

I have got very limited use of my right arm at the minute but I was planning to take a few days off this week anyway, just as a mid-season break as we've got five weeks until Stockholm.

So that ties in quite well but I'll have to see how it goes, see how well this arm heals.

I'll still be able to run but... for the next week or so I'd struggle to control the bike with my arm and with swimming we'll have to see because of the wounds in my back.

Hopefully after a week I'll be able to resume business as normal and hopefully not too much damage or too much time lost.

Obviously we'll be careful and not risk causing any long-term damage, but at the minute I'm optimistic of being in Stockholm and definitely London - London is the main priority.

I was absolutely delighted how things had gone on the Saturday in Hamburg, where I finished second behind Anne Haug.

I'd had a tough few weeks after Kitzbuehel; before Kitzbuehel I wasn't very well and I was put on antibiotics when I got back from Austria.

So I was really pleased to podium in Hamburg. I didn't feel the best in the race and when everything isn't quite going to plan and you still do well, that's probably a better felling because you've overcome adversity and it's a bit sweeter.