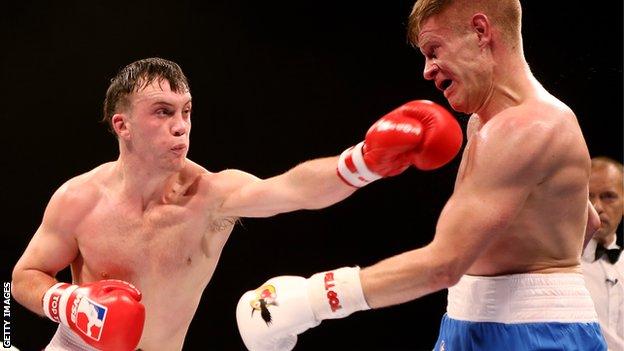 The welterweight will fight in the International Boxing Association (AIBA) Pro Boxing next year.

Evans will still be allowed to compete at the 2016 Olympics in Rio as well as any qualifying tournaments.

But the contract makes no provision for his release for the 2014 Commonwealth Games in Glasgow.

"I want to try to get [Olympic] gold - that's definitely my aim," Evans said.

"It's the top seven out of APB [AIBA Pro Boxing] at the weight who go automatically to the Olympics so it's a really good chance I am going to go there.

The Pro Boxing competition will launch later this year, and will allow amateur boxers to earn purses for competing while maintaining their Olympic eligibility, which was previously prohibited.

Evans competed in a similar format this year when representing Great Britain in the World Series of Boxing, also run by the AIBA.

The British team reached the quarter-finals but will not compete in the next series because of a lack of funds.

Evans won the welterweight silver medal at London 2012 to become the most successful Welsh Olympic boxer.

His bid to become the first Welshman to win Olympic boxing gold was thwarted by Kazakhstan's Serik Sapiyev.

Since the Games, Evans has turned down offers from professional promoters in order to keep open the chance of going one better at the Olympics in Rio in 2016.