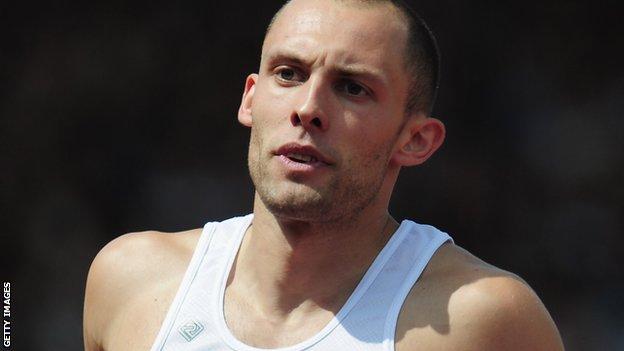 World 400m hurdles champion Dai Greene has pulled out of this weekend's Anniversary Games in London through injury.

The 27-year-old withdrew from last the Diamond League meeting in Monaco with an inflamed Achilles tendon.

"So disappointed that I'm having to withdraw from the Anniversary Games this weekend. Hopefully it will pay off at the World Champ," Greene tweeted.

The World Championships start on 10 August.

Greene's management company had earlier confirmed the Welsh athlete would not compete at the Olympic Stadium this week.

"World champion Dai Greene will not compete in London after failing to recover from a slight niggle in his leg," Definitive Sport tweeted.

"Main focus is now the Worlds!"

Greene has been included in the Great Britain team for the World Championships in Moscow to defend the title he won in Daegu in 2011.

The injury is the latest setback to befall Greene in a season which has been plagued by fitness concerns and illness.

The Welshman's start to the season was delayed because of a double hernia operation in March and he finished fifth at the Birmingham Diamond League meeting at the end of June.

There he lost to Welsh rival Rhys Williams, the first time he had been beaten by a fellow Briton in five years.

That performance followed defeat by unfancied German Silvio Schirrmeister at the European Team Championships in Gateshead.

Greene looked like he was getting back to his best as he ran a season's best on 15 July to win the British Championships before suffering his latest setback.