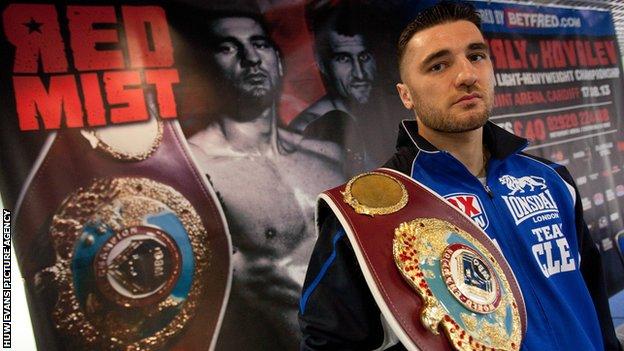 WBO light-heavyweight champion Nathan Cleverly acknowledges he must remain patient if he is to secure a fight against a big-name opponent.

The Welshman will defend his title against Russian Sergey Kovalev on 17 August at Cardiff's Motorpoint Arena.

Cleverly's attempts to secure a bout against Bernard Hopkins and other high-profile fighters have so far been unsuccessful.

"Those fights will happen, I can assure you of that," Cleverly said.

"It can be a little bit frustrating but ultimately you just remain patient, get on with your business and keep winning.

"It takes time. It doesn't happen overnight and when it happens it's going to be big.

"It's going to be one big fight after another so patience, keep winning and that's what I'll do.

Sergey Kovalev is a technically good boxer and a massive puncher, heavy handed in both hands.

"Win this fight and win in style, that's certainly going to open the doors for me in the [United] States."

The 26-year-old's promoter, Frank Warren, said in June that opponents were running scared of Cleverly, who retained his WBO light-heavyweight title with victory over Robin Krasniqi in April.

Cleverly has made no secret of his desire to unify the light-heavyweight division by beating IBF champion Hopkins and WBA champion Beibut Shumenov.

But Cleverly is confident victory over Kovalev could finally secure a fight against 48-year-old Hopkins, who will defend the IBF title against Karo Murat in October.

"I believe if I win this fight, that fight could certainly happen," Cleverly added.

"But hopefully by beating Kovalev that leaves the door open for me to step in and eventually take on that fight."

Cleverly describes his 17 August bout against American-based Russian Kovalev as the "biggest fight" of his life.

Both fighters are undefeated, with the 30-year-old from Chelyabinsk - who now fights out of Florida - winning 21 professional bouts.

"I'm aiming for better things. This is a must-win for me," Cleverly said.

"Sergey Kovalev is a technically good boxer and a massive puncher, heavy handed in both hands.

"He's got 18 knockouts in the first three rounds so that shows what type of fighter he is. He comes with one thing in mind. I've got to be ready for that.

"I may have to weather the storm early on in this fight and take him into the trenches late on. I'm confident I'm going to get through this."