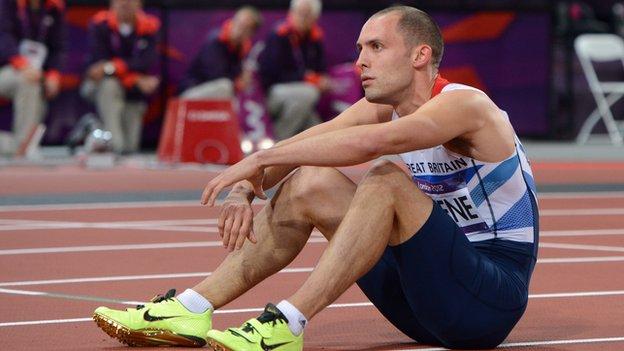 Dai Greene says he is still "in with a chance" of defending his 400m hurdles world title, despite a difficult build-up to the championships in Moscow.

The 27-year-old Welshman lifted the title in Daegu two years ago, but has been affected by injuries this season.

Despite the fact that his preparations have been far from ideal, he remains positive ahead of Monday's heats.

"I seem to be over the worst and hopefully I can turn it around in time," Greene said.

This season's problems are a continuation of the issues he had last year when he finished fourth in the Olympic final, behind champion Felix Sanchez.

The Llanelli-born runner revealed after the Games that he had had surgery on a knee injury during the winter which disrupted his training.

Last winter Greene had surgery to repair a hernia, followed by a leg injury which led to his withdrawal from races in Monaco and London in July.

"I haven't had the best outdoor season, but I've trained really well," he said. "It's been frustrating, it's just been bad timing a lot of it.

"The hernia wasn't too bad to come back from, I made a speedy recovery. It's just unfortunate I got ill during the season as well and that affected the running as opposed to the training.

"And after dropping out of the last two competitions I feel like my season hasn't really got going yet."

Greene went to the British base camp before the rest of the team to allow himself extra preparation time.

He believes that, and the fact that no obvious favourite has emerged for the event, means he still has a chance in Russia.

"You've got to look at the positive side of things because no-one has really set their stall out in the 400m hurdles and been dominant all season," added Greene.

"Everyone's had their ups and downs so hopefully if I can perform to the best of my ability I can put myself in with a chance of a medal again.

"I've got a lot of experience to draw on and technically I'm very good.

"Hopefully I'll find my form in the early rounds and run a season's best at least to give myself every chance of defending my title."