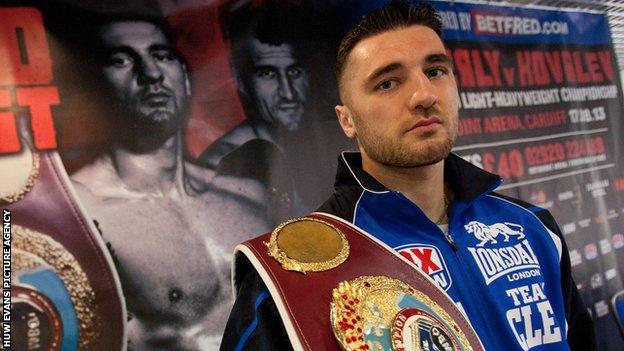 Former six-weight world champion De la Hoya believes the Welshman needs a big-name fight at this stage of his career.

Cleverly's attempts to secure a bout against Bernard Hopkins and other high-profile fighters have been unsuccessful.

He will make his sixth defence since winning the WBO title in December 2010 when he steps in to the ring with Kovalev on Saturday, 17 August at the Motorpoint Arena.

I am sure Nathan Cleverly would love to fight a legend like Bernard Hopkins. Hopkins is willing to face anybody and Hopkins understands that Nathan Cleverly brings a lot to the table.

De la Hoya is president of Golden Boy Promotions, which includes Hopkins among its roster of fighters.

He claims Cleverly's lack of world recognition is due to his failure to fight a big-name opponent.

"You have to have a 'name' opponent to elevate yourself to a whole new level," De La Hoya told Radio Wales Sport.

"I believe that is what he is missing. You have to fight that champion, that fighter, that people feel is the best.

"I believe it is coming. Cleverly is a fighter who is willing to fight the best and it's time we see that potential in the ring.

"I believe it could be Bernard Hopkins. He is a fighter who is a legend, has a big name worldwide and is still considered the best light heavyweight out there."

Cleverly's promoter, Frank Warren, has said opponents were running scared of Cleverly, who retained his WBO light-heavyweight title with victory over Robin Krasniqi in April.

Cleverly, 26, has made no secret of his desire to unify the light-heavyweight division by beating IBF champion Hopkins and WBA champion Beibut Shumenov.

"That is a fight that would be very interesting to see," said De la Hoya.

"I am sure Nathan Cleverly would love to fight a legend like Bernard Hopkins. Hopkins is willing to face anybody and Hopkins understands that Nathan Cleverly brings a lot to the table.

"He understands that Nathan Cleverly is a very dangerous fighter for him because of his age. Hopkins is going on 50, is still a machine and is still willing to fight the very best."

Listen to the full interview with Oscar de la Hoya in The Boxing Hour in Radio Wales Sport from 19:00-21:00 BST on Thursday, 15 August on BBC Radio Wales.