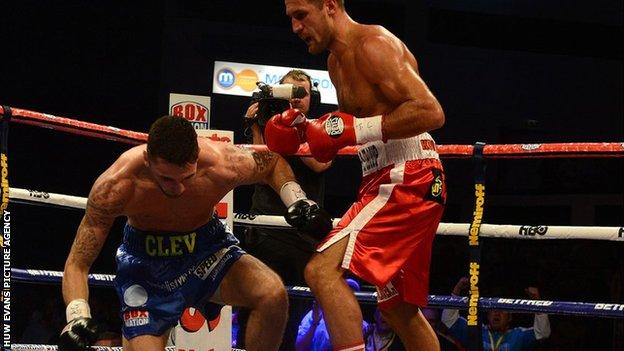 Welshman Cleverly, 26, was knocked down for the first time in his career in the third round and was on the brink of defeat from that moment on.

After further punishment, the bout was ended in the fourth round to leave unbeaten Kovalev with another victory.

Kovalev 30, has now won 19 of 22 bouts inside the distance, this time in front of American pay-per-view television.

Cleverly said he had "nothing to be ashamed of".

The Welshman added: "Obviously when it happens it's devastating.

"And fair play to Kovalev, he hits hard; the guy hits hard with those little gloves on.

"It shakes your brain when they catch you on the head and clubbing shots and obviously he kept the pressure on."

Kovalev said: "I came here and nobody believed I would beat their champion, but everywhere else in the world they knew already how good I was.

"I knew he couldn't take my power. The fact the fight was televised on HBO in the United States was very important for me."

Cleverly's ambitions of unification fights in the America encouraged him to accept Kovalev's challenge.

But at the Motorpoint Arena Kovalev belied his status as marginal favourite with some bookmakers to leave Cleverly's fans disappointed.

The mathematics degree holder had seen off five previous challenges to his title but the Cefn Fforest man could not withstand Kovalev's onslaught.

Kovalev's power-punch intentions were clear from the first bell while Cleverly looked to outwit his opponent.

The Welshman may have gained confidence after opening a cut over Kovalev's right eye.

But that did not trouble the Russian any further as his jab and powerful rights made their mark.

In the third round Cleverly was on the receiving end of a telling blow and was soon on the canvas.

Kovalev put him down again and referee Terry O'Connor seemed poised to step in before the third round was over.

The bell rescued Cleverly on that occasion, but Kovalev's ruthless follow-up ensured the bout ended in the 29 seconds into the fourth.

On the undercard Wales' after stopping Jamaican holder Ovill McKenzie in the 11th round.