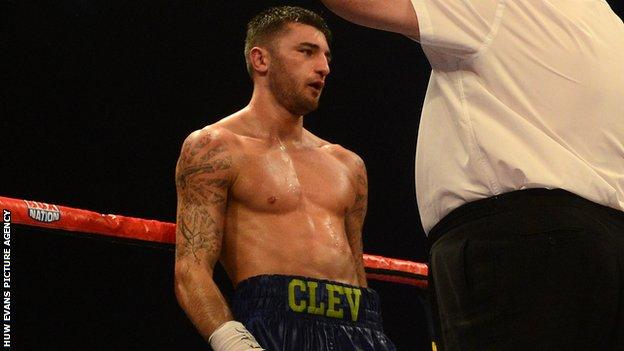 Nathan Cleverly says he is considering his future in boxing after his WBO light-heavyweight title defeat by unbeaten Russian Sergey Kovalev.

The Welshman was knocked down for the first time in his career and suffered his first defeat in the professional ranks in Cardiff on Saturday.

Cleverly, in his sixth title defence, went down in the third round and lost the fight 29 seconds into the fourth.

The 26-year-old said: "I could leave it there or give it another go."

Kovalev, 30, has now won 19 of 22 bouts inside the distance and proved too strong for Cleverly at the Motorpoint Arena.

Cleverly had made no secret of his ambitions of unification and a career-defining fight in America against boxing great Bernard Hopkins, but his defeat by Kovalev ends his hopes of that.

The mathematics degree holder had seen off five previous challenges to his title but the Cefn Fforest fighter could not withstand Kovalev's onslaught.

"I will have a holiday now and recover and see where I go from here and see what I want to do in life now," said Cleverly.

"I will go away and live a normal life for a bit now. Just leave boxing for a bit - it has been an intense period.

"You know six weeks into that where you want to go. Your instincts tell you if you are missing boxing, or are you going to find another career path. Who knows where my heart is going to lie?

"If I continue, I will come back and give it a go. But the background I have got and the brain I have got, do I really need to continue? It could go either way, my career."

Cleverly says he was happy with his preparations for what could be his final fight despite the defeat.

"The good thing is that I prepared well and I cannot have any regrets, because I missed training or cheated on anything," he said. "I can hold my hands up and say Kovalev took his chance."