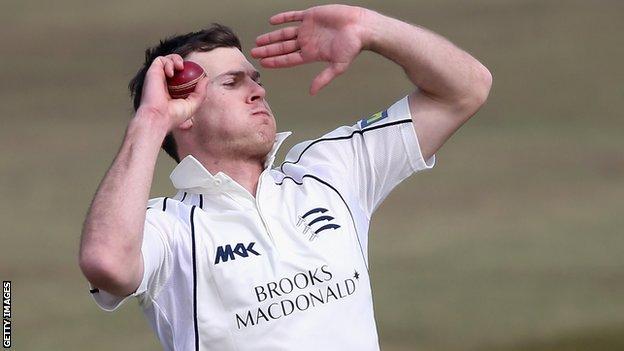 Overall it's been a good few weeks in my season and hopefully it will stay that way as we, at Middlesex, continue our challenge for the County Championship title.

My focus is now on our game with Derbyshire - a win in that and, if we beat them, we'll be right in the mix with four games to go.

It was a weird thing to walk into the Swalec Stadium, where I've spent a lot of time over the last few years

Of course, I can't ignore us losing on my return to Glamorgan where my old county beat us in the Yorkshire Bank40 competition.

It was an interesting day even if the result didn't go quite as I planned. It was a decent game on a tricky sort of pitch and we probably let Glammy get a little bit away from us.

I had a pretty good welcome although there were a few little boos when I came into bat slightly later in the evening - perhaps a few beers had been sunk by then - that's to be expected, but as a rule the reaction to me was fantastic.

In the last five overs we bowled. I think they got the best part of 40 or 50, then came out firing and got some early wickets, which really put us on the back foot.

After being 30 for five we did well to be in the game as long as we did.

But it was a weird thing to walk into the Swalec Stadium, where I've spent a lot of time over the last few years, stroll into the away dressing room and listen to the victory song sung by the Glammy boys through the wall of the dressing room.

Sitting in the opposite dressing room in such circumstances was very strange, but it was great to go home and see some of the boys, even if the result was a disappointment.

That said, Glammy have done really well in the competition although they might have just slightly scuppered their chances by losing since to Gloucestershire.

They still might have a chance with a couple of games to go and I wish them all the best.

Thus far our seasons have been similar in the one-day competitions even if we're at different ends of the spectrum.

Both counties have had reasonably successful Twenty20 competitions without getting through and giving ourselves a chance. Not getting a quarter-final place was pretty disappointing from both teams' point of view.

In terms of the YB40, we are probably out of it now and we got ourselves in a tricky situation by not starting well - and losing the other night to Glamorgan probably knocked us out of it.

It's the opposite situation in the Championship. We've had a successful competition so far and are looking for a triumph to push towards winning it.

But Glammy are struggling a little bit in Division Two, which is a shame.

Away from the county game I was slightly surprised to be called up for the England Lions against Australia.

I've missed a few more days than I should have done this season with a some niggling injuries and it was great to play and be in the selectors' thoughts.

And when you get a chance to play against the Aussies in an Ashes summer it's always a bit more special.

Hopefully we did a pretty good job in keeping them in not fantastic form before the next Test match starts later this week.

We put in a pretty good performance with the bat and kept them out in the field for the best part of the day, Gary Ballance a good 100 and we bowled pretty well as a group and no-one got past 50.

It was a great game to play in and I'm reasonably happy with the way I played, which is always nice.

Hopefully England can now turn them over and enjoy an even more comprehensive Ashes series win.

But Australia have still got a huge amount to play for because there's another Ashes series starting down under once our winter kicks in.

They'll be looking to find form to take back to Australia and potentially beat us back on their own turf.