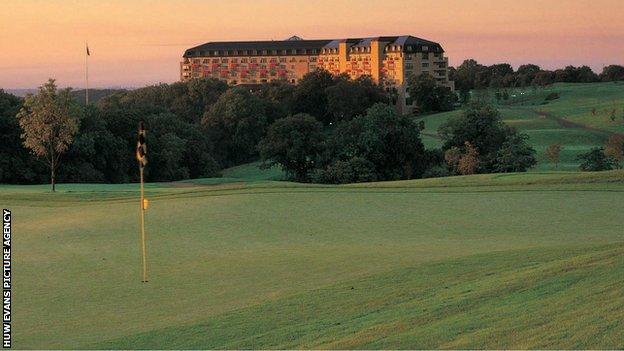 Philip Price says losing the Wales Open would be a major blow for the country.

The Wales Open has been held at the Celtic Manor in Newport - the venue for Europe's 2010 Ryder Cup triumph - since 2000 but the contract ends in 2014.

The event has struggled to attract the world's top players and resort owner Sir Terry Matthews has blamed the position given in the golf calendar.

"If we lose this tournament I think it may be lost forever... it would be devastating," Price said.

"It's really important for Welsh golf, especially in the south Wales area for the Celtic Manor.

"It's been on the calendar since 2000, it's been well supported with the spectators - people love coming here.

"Terry Matthews puts on a great tournament. At a guess I think the date change would benefit him a lot, and let's hope they give him the date that he wants and we'll get the field that he wants.

"I hope he decides to carry on with it, we need it."

The tournament has moved from early summer to late summer but still clashes with major players' preparations for other major tournaments.

World matchplay champion Paul Casey has withdrawn from this year's Wales Open, which begins on Thursday while home favourite Jamie Donaldson is absent with a back injury.

The lure of the Wales Open being the start of the qualifying process for the next Ryder Cup in September 2014 has also not seemed to have stimulated some of the top players, even with new Europe captain Paul McGinley there.

However, it is far from a poor field with the likes of Darren Clarke, Miguel Angel Jiminez, Francesco Molinari, Ross Fisher and defending champion Thongchai Jaidee all playing.

"I don't think we have a better field [then previous years]," added 2002 Ryder Cup hero Price.

"I think Terry Matthews is a little disappointed he hasn't got the field he had planned on."