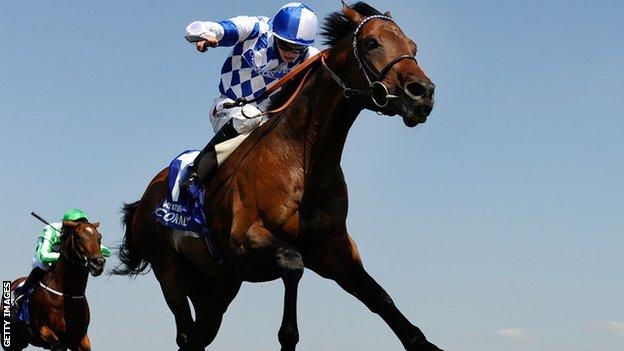 Al Kazeem owner John Deer says it is "incredible" that he has bred a horse good enough to run in the Qatar Prix de l'Arc de Triomphe.

Chepstow-based Deer has confirmed his five-year-old will run in Europe's richest race in Paris on 6 October.

Al Kazeem has been beaten in his last two outings, but has won three Group One races this summer.

"Who'd have believed that I'd breed a horse as good as this - it's quite incredible, amazing," said Deer.

Welshman Deer, 75, originally from Alltwen in the Swansea Valley, says firm ground at Leopardstown and York contributed to unexpected defeats for his horse in its last two races.

The Roger Charlton-trained colt was beaten into third place in the Juddmonte Stakes on 21 August and was second in the Irish Champions Stakes on 7 September.

The decision to enter the mile-and-a-half race at Longchamp, however, is based on the form which saw Al Kazeem triumph in three consecutive Group One races.

Ridden by James Doyle, Al Kazeem's victory in the Tattersals Gold Cup at The Curragh was followed by the Prince of Wales Stakes at Royal Ascot.

His last success came in the Coral Eclipse Stakes at Sandown on 7 July, taking his winnings past £800,000.

"So we knew he could handle those conditions and the distance, so it's an opportunity really to take him over to Paris on the 6th of October."

It's believed Al Kazeem is the first Welsh-bred and owned horse to enter the race, though his bloodline does include the 1971 winner Mill Reef who was ridden to victory by Geoff Lewis from Talgarth near Brecon.

Deer is also conscious that the field looks to be the strongest for many years.

"It looks a top-class race," he said.

"It will be a very difficult race to win. It would be nice to record another win for Wales as Geoff Lewis did - and if he (Al Kazeem) did win it it would be an incredibly proud moment.

"Whoever wins this race can see themselves up there as the best horse in the world really."