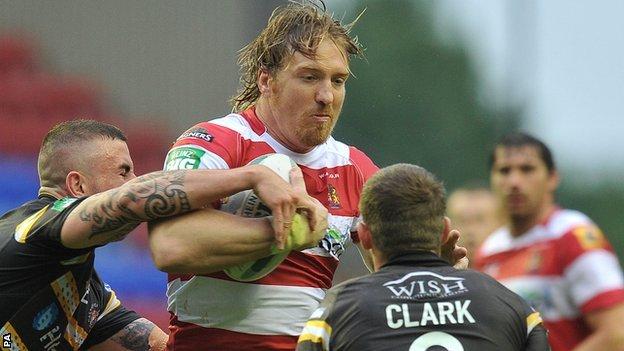 Andy Powell is absent from Wales' 23-man squad for the forthcoming Rugby League World Cup because of injury.

The 32-year-old, a Wales international in union, crossed codes to join Super League side Wigan from Sale in April.

The squad contains 14 players from Super League, eight of whom are Welsh-born with five in contention for a Grand Final appearance on Saturday.

"While I welcome our four new quality players to the squad, I'm really pleased that we're maintaining consistency and we don't have a whole team of newcomers," said coach Harris.

"We have a lot of experience in the side with 14 Super League players - the most I've ever known in the squad - and all of our players are improving year on year as they continue their international careers.

"We can't wait for the tournament to start and, as always, aim to cause a few shocks."

Wales begin their World Cup campaign against Italy at the Millennium Stadium in Cardiff on 26 October.