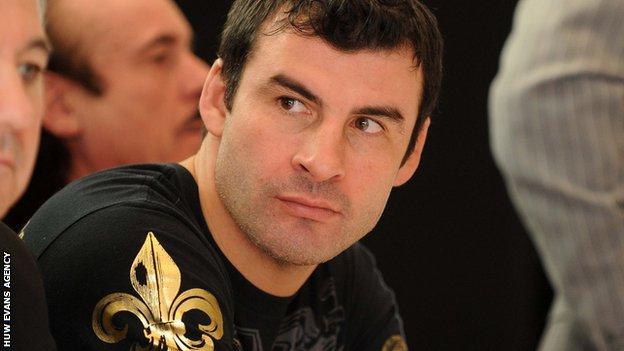 Undefeated former world champion Joe Calzaghe says he still gets offers to come out of retirement.

The former world super-middleweight and light-heavyweight announced his retirement in February 2009.

The Welshman, 41, who reigned as a world champion for more than 11 years, quit the ring with a record of 46 wins from 46 fights.

You ask all the super-middleweights who is the best fighter in Britain? If I came back, it would be me. Simple as.

Calzaghe celebrated the 20th anniversary of his professional debut on 1 October.

Paul Hanlon was his first opponent on the undercard of Lennox Lewis' world title fight against Frank Bruno at the old Cardiff Arms Park. He stopped Hanlon in the first round and won seven of his first nine bouts in round one.

"I said: Why are you calling me out, I have been retired for four years?

"You ask all the super-middleweights: Who is the best fighter in Britain? If I came back, it would be me. Simple as.

"If I'd lost my last fight, would I have boxed again? Course I would've. I would have to avenge it.

"But who retires on their own terms? When they won everything! Rocky Marciano, Lennox Lewis... there is nothing else for me to achieve.

"I did everything I wanted to do. I had a beautiful and amazing time, tremendous experiences. It (boxing) gave me a life I would never have had.

"Hopefully, I will get in the Hall of Fame one day and my name is there forever."

Calzaghe held the WBO, WBA, WBC and IBF super-middleweight belts during his 16-year professional career before he announced his retirement.

He was born in London but moved to Wales when he was two, and chalked up an impressive record as an amateur, winning 110 of his 120 contests after taking up the sport at the age of nine.

Trained by his father Enzo, he became British super-middleweight champion in 1995 before capturing his first world title in 1997, outpointing Chris Eubank to claim the WBO crown.

Despite suffering from several hand injuries, Calzaghe defended the title a total of 21 times, adding the IBF version to his trophy cabinet with a stunning victory over American Jeff Lacy in March 2006.

He then claimed the WBA and WBC belts with what was his most satisfying fight, a unanimous points win over Denmark's Mikkel Kessler at the Millennium Stadium in Cardiff on 4 November, 2007.