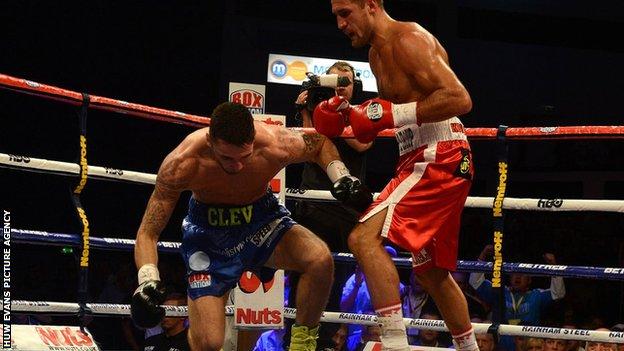 Nathan Cleverly says he wants a rematch with Sergey Kovalev.

The 26-year-old Welshman had hinted at retirement after being stopped in four rounds by the Russian in August's world light heavyweight title fight.

But the Cefn Fforest fighter told BBC Radio Wales Sport he wants the chance to regain his WBO crown.

"There's only one fight I want and that's the rematch - I don't care about the money," said Cleverly. "Am I going to get it? Who knows?"

Cleverly suffered his first career defeat at the hands of the big-punching Kovalev, 30, and was also knocked down for the first time in his career.

He concedes that some observers might be surprised at his willingness to face the Russian for a second time, given the nature of his defeat.

"This guy, wow he hits hard you know," admitted Cleverly.

"I've sparred with big punchers before and sparred heavyweights and I've fought good punchers but, this guy, he does hit freakishly hard. But I would still love the opportunity again.

"Everything was going to plan in that fight, and [then] I got caught.

"And when I got caught it spiralled downhill then because I couldn't recover. But hopefully if we get the rematch I'll avoid getting caught with the big punch and maybe take him into my territory.

"If he beats me a second time I'll hold my hands up and congratulate him, but the chance to fight for my world title again - that's what I want next."