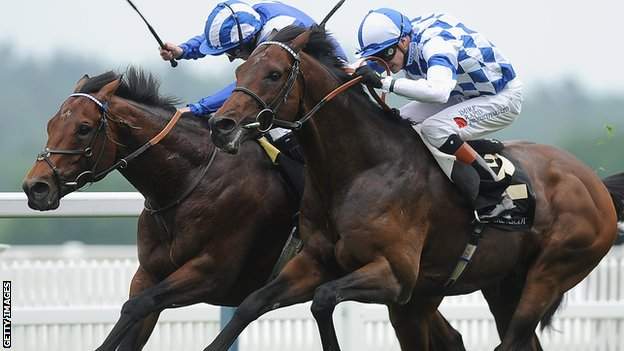 If you saw Al Kazeem in any of his three Group One race wins this summer you would have been struck by his beauty and power, but apparently that wasn't always the case.

''When he was born he wasn't outstanding,'' says owner John Deer, who bred the horse in Chepstow.

"He didn't develop into a beautiful horse until he was three.

"He was slow, so we decided not to send him to the sales and give him some more time."

Looking back on that decision Deer, 75, admits he made a good choice.

Having missed most of his four-year-old campaign in 2012 with a hairline fracture of the pelvis, Al Kazeem bounced back this season for a Group One treble in the space of 41 days - the Tattersalls Gold Cup at the Curragh, Royal Ascot's Prince of Wales's Stakes and finally the Coral-Eclipse at Sandown.

John Deer was raised in Alltwen, a village in the Swansea Valley.

Trained in mechanical engineering, he was working for Rolls Royce when he and his business partner Sir David McMurtry founded Renishaw in 1973.

Horse racing is not his only sporting passion. A lifelong Swansea City fan, he sponsors the Jacks' Wales international left-back Ben Davies.

His love of Swansea City is also reflected in the name of three of his other horses: Liberty Jack, Trader Jack and Major Jack.

The horse was born at Oakgrove stud in Chepstow, formerly the yard of Colin Davies, who trained hurdler Persian War in the 1960s, but now the 300-acre estate next to the racecourse is home to around 25 breeding mares and their offspring.

That is a tiny number compared to the bloodstock powerhouses in the sport, so it may be a little puzzling to some as to how one of the best racehorses in the world began life in Wales.

Swansea Valley-born Deer bought the estate 14 years ago as a business project.

He was a relative novice when it came to horse breeding, but had a track record in business having co-founded the internationally successful engineering company Renishaw.

Deer still holds the position of deputy chairman at the firm based in Wotton-under-Edge, Gloucestershire.

But it was when he and co-founder Sir David McMurtry sold a 20% share in the company that Deer became a horse owner, using some of the money from the sale to buy Oakgrove.

He says: "I think I worked it out that the best way to deal with racehorses is to breed my own, have my own stud, sell some and race some.

"I enjoy choosing the stallions and I enjoy selling the yearlings.

"It's very interesting as you can follow the bloodlines of the horses. We have four generations of the Al Kazeem bloodline.

"His mother, Kazeem, was born here and is in the field with another foal on its way. We have a few of Al Kazeem's brothers and sisters here, but I doubt any are as good as he is. It's been a dream."

Despite recent defeats at York and in Ireland, Al Kazeem is still the leading British hope for Europe's richest race, the Prix de l'Arc de Triomphe at Longchamp.

It's likely to be his final run in the blue and white colours of John Deer.

The horse has been sold to the Queen and will begin his stud career in 2014 at The Queen's Royal Studs in Sandringham, Norfolk.

"I wouldn't have believed that I would breed a horse and sell it to the Queen. It's quite incredible really," says Deer.

Al Kazeem is not the first Group One winner Deer has owned and bred, as half-brothers Patavellian and Avonbridge starred in his blue and white-checked colours in the 2000s, with Avonbridge being crowned the champion sprinter in 2005. He now stands at Oakgrove.

Deer admits he has no secret method for breeding one of the world's top middle-distance horses.

"It's very difficult to breed a horse that does well," explains Deer.

"I can count on one hand the number of really good horses I've bred over the years. It's luck.

"The big breeding operations have hundreds of mares and they send those mares to top stallions. Out of that lot they get one or two top horses.

"It's amazing really that here we are with Al Kazeem running in the Arc. There is no secret, it really is luck but we'll be there on Sunday in Paris. It's very exciting."

When Al Kazeem lines up, he will not only carry the hopes of Deer and his trainer Roger Charlton, but also Chepstow and Wales.

"I'm Welsh and my stud is in Wales, Al Kazeem was born and bred in Wales and I hope he might prove to be the best horse bred here," he said.