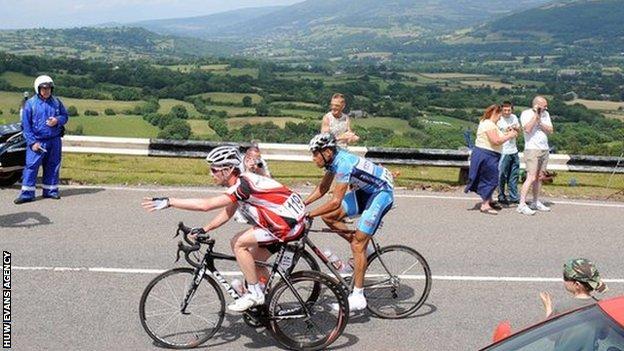 Wales will host the 2014 National Road Race Championships after Monmouthshire was awarded the race.

The event will take place in and around Abergavenny from 26-29 June, and will incorporate time trial and road races.

Jonny Clay, British Cycling's Cycle Sport and membership director, said: "Following on from the success of the 2013 Championships, where we delivered an event witnessed by 35,000 people on the streets of Glasgow, we had significant interest from towns in hosting the Championships for next year.

"The spectacle provided by the victories of Joanna Rowsell, Alex Dowsett, Lizzie Armitstead and Mark Cavendish took the event to a new level.

"This will be the second time in five years that the Championships has visited Wales, with the event held in Abergavenny in 2009.

"Abergavenny also hosted a successful British Cycling Premier Calendar road race this year and has a strong pedigree in cycling led by Grand Prix of Wales organiser, Bill Owen, who will organise the Championships for Monmouthshire next year.

"In 2009 we saw a race in which Chris Froome, Sir Bradley Wiggins and Mark Cavendish were all key protagonists and 2014 should be a fitting prelude to the Tour de France Grand Depart in the UK."