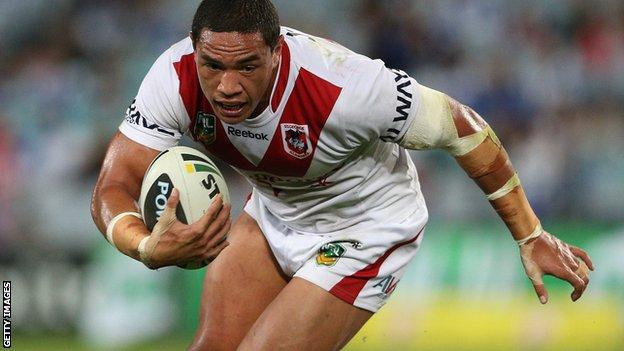 Tyson Frizell has given Wales a fitness boost ahead of the Rugby League World Cup.

Wales were resigned to be without the St George Illawarra second row for the tournament due to injury.

But coach Iestyn Harris said Frizell is recovering quicker than expected and has added the 22-year-old to his squad.

Wales take on Italy at the Millennium Stadium in Cardiff on the opening day of the tournament on 26 October.

"Our head physiotherapist Ben Stirling has been in contact with his club in Sydney and they are now saying that his injury is recovering a lot quicker than they expected," Harris said.

"They will know by next week whether he will be fit or not and if it's positive news then we'll be delighted to have him over here playing for Wales once again.

"His inclusion would mean that we will have 15 players in our side who have played at the highest level this season, which would be the most we've had in many years."

Frizell made his debut for Wales against Ireland in 2011 and made two further appearances in the Four Nations tournament the same year.

He has made 22 appearances for St George Illawarra this season and if he does regain fitness, he will be Wales' only representative from the NRL.