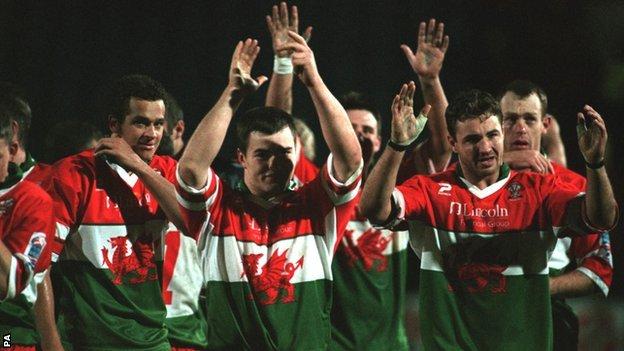 Coach Iestyn Harris leads Wales into the 2013 Rugby League World Cup of some of the Welsh sides of the past.

Wales began against Italy at the Millennium Stadium on 26 October - one half of the tournament's opening double-header that also saw England take on Australia - and now face the United States in Wrexham on 3 November and the Cook Islands on 10 November in Group D.

Saturday's opening matches had been given added spice by England's surprise loss to Italy in a warm-up match at the weekend.

Despite Wales' opening defeat to an Italy side full of NRL experience, the match was a cross-group fixture and Wales can still top their pool.

If they do they will face the winners of Group A - now likely to be Australia after they - in Wrexham on 16 November.

But before Wales complete their 2013 campaign, BBC Sport looks back at the history of Wales in rugby league's showpiece event.

Wales began life as an international side in 1908 and announced themselves with a 9-8 win over New Zealand's famous 'All Golds' touring side in their first official Test.

But despite producing players of the calibre of wing Billy Boston, Wigan's all-time record try scorer, great Salford and Workington Town centre Gus Risman, and goal-kicking full-back Jim Sullivan - another Wigan legend - Wales did not play in a World Cup until 1975.

Even then, the 1975 tournament was billed not as a World Cup but as the 'World Championship Series' and saw Wales, France, England, Australia and New Zealand compete in a home-and-away league over nine months.

Wales began with defeat by France in Toulouse but rebounded to beat England 12-7 in a match played at Lang Park in Brisbane, with Dai Watkins, Clive Sullivan and David Treasure grabbing tries for Wales.

England got their revenge in the return at Warrington, while two losses to Australia and one to New Zealand saw Wales languishing at the foot of the table.

But in their final two games of the campaign, Wales beat New Zealand 25-24 in a thriller in Swansea - despite having prop Jim Mills sent off - then overwhelmed France 23-2 in Salford to finish joint-third in the table with the Kiwis.

Mills, who also played six Tests for Great Britain, got his marching orders for stamping on the head of John Greengrass as the Kiwi prop went over for a try.

Greengrass needed 15 stitches in hospital while Mills, who played for Widnes and later became chairman of the club, earned notoriety for a moment of thuggery that saw him suspended for six months by the Rugby Football League and given a lifetime ban in New Zealand.

Wales did not feature at a World Cup again until 1995, as a Great Britain team had been reintroduced in 1977.

But the Dragons announced their return with a bang, having already served notice of their talent by winning the European Championships that year.

Much of the cream of amateur Welsh rugby union had been enticed north to the 13-man code in the preceding years.

That meant Wales were able to field the likes of Jonathan Davies, John Devereux, Allan Bateman, Scott Gibbs, Adrian Hadley, Scott Quinnell and Dai Young, alongside those like Harris, Anthony Sullivan and Keiron Cunningham who had grown up within rugby league.

They comfortably topped Group 3 with a 28-6 win over France in Cardiff and a hard-fought 22-10 victory against Western Samoa in Swansea.

That set up a semi-final against England, who Wales had humbled in the European Championships that year - seeing off their rivals 18-16 at Ninian Park in Cardiff.

Wales were holding their hosts 2-2 with a quarter of the match gone before a flowing length-of-the-pitch England move, started by wing Jason Robinson, ended with Paul Newlove forcing his way over in the corner.

On the stroke of half-time England captain Denis Betts went over to increase their lead to 11-4, before Phil Clarke and Martin Offiah, twice from cross-kicks, added further tries in the second half.

Wales had just Rowland Phillips' try to show in that second period, but it was a beauty of quick thinking and quick feet.

The replacement second row was brought down eight yards short of the line by Newlove, but spotting he had no marker at the play-the-ball the Warrington player tapped to himself and charged over.

Australia beat New Zealand in the other semi-final and the Kangaroos went on to edge England 16-8 in the final at Wembley.

With Australia continuing to dominate rugby league, there had been a move to reintroduce a Great Britain side for the 1998 World Cup - a proposal that predictably angered the Welsh - but in the end the tournament was cancelled because of the Super League power struggle.

Peace was eventually restored and the next World Cup was held in 2000, although the Wales side had a much-changed character about it.

With rugby union having gone fully professional in 1995, the steady flow of players north from south Wales' 15-a-side heartland had largely dried up.

That saw a greater percentage of the squad drawn from rugby league's traditional territory, while the management's search for players with Welsh heritage unearthed a few gems such as Canberra Raiders prop Justin Morgan.

But while there had been a certain amount of rebuilding undertaken, Wales were still able to field the talents of Harris, Sullivan, Cunningham, Lee Briers, Anthony Farrell and Neil Cowie.

Wales were drawn in Group 2 alongside New Zealand, Lebanon and the Cook Islands - their first opponents, whom they disposed of 38-6 with ex-North Queensland centre Kris Tassell scoring a hat-trick.

Next up were Lebanon. Not a nation associated with rugby league excellence, the sizable number of second- and third-generation Lebanese in Australia meant Wales' opponents were actually packed with NRL experience.

Wales led 18-6 at half-time in Llanelli and when skipper Harris sent Wes Davies over for a 24-10 lead, the game looked safe for the home side.

But Lebanon staged a thrilling fightback as Hassan Saleh went over for two converted tries in the final three minutes, leaving Wales clinging on for a precious 24-22 win.

That result secured Wales' place in the quarter-finals before they faced New Zealand in their final pool match, which the Henry Paul-inspired Kiwis won at a canter - scoring 11 tries in a 58-18 win at the Millennium Stadium.

Kept away from any of the big guns in the quarter-finals, Wales were comfortable 22-8 winners over Papua New Guinea in their first knock-out match before facing favourites Australia in the semi-finals in Huddersfield.

When Brett Kimmorley and Wendell Sailor crossed early for the Kangaroos it seemed as though everything was going to script, but Wales produced a thrilling reply with three tries in eight minutes.

Harris converted all three tries, and with Briers adding two drop-goals Wales led 20-8 and were sniffing one of the biggest upsets in World Cup history.

But Australia reduced the deficit to 20-14 before half-time as Brad Fittler crossed for a converted try, then snuffed out Welsh hopes with a scintillating display in the final 25 minutes of the game.

Bryan Fletcher, Darren Lockyer, twice, Fittler, Craig Gower and Ben Kennedy all crossed to earn the Kangaroos a 46-22 win and send them into the final, where they crushed New Zealand 40-12.

There was no World Cup in 2004 and Wales failed to qualify for the 2008 World Cup in New Zealand, but under the guidance of Harris - who took over as coach in 2009 - they have steadily improved.

Wales enter the 2013 tournament as outside hopes, but the Dragons have shown in the past they should not be taken lightly and it would be no surprise if they add another notable scalp to their collection before they are finished.