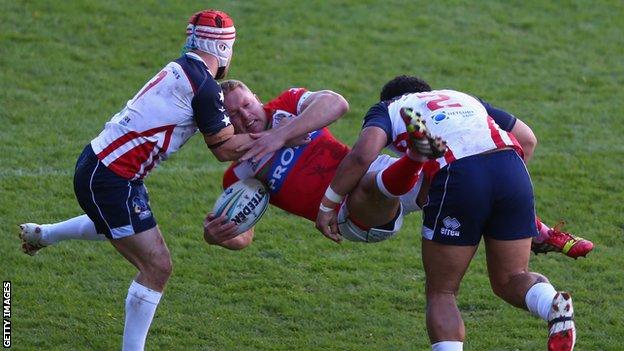 Iestyn Harris admits Wales were not at their best after they were eliminated from the Rugby League World Cup.

The United States inflicted Wales' second successive defeat of the competition with a 24-16 win.

Harris was frustrated Wales had failed to take their chances against the Tomahawks.

"We had to be at our best to beat them because they were a similar standard to us and we weren't at our best," he said after the Group D game in Wrexham.

"I think individually some of our players weren't quite at what they've been all year.

"I'm sure when they look back at that they will be disappointed with themselves.

"As I always did as a player, you look back and review your own games. They will be disappointed with that.

"We created a lot of opportunities and took a lot of wrong options.

"Whether it was a poor pass or a mistimed run we chose the wrong options. I lost count of the amount of times we did that in the 80 minutes.

"We probably had 25-30 opportunities to score points and lacked some quality on the edges.

"When we'll look at that game back we'll probably be more disappointed than first hand."

Wales had opened the scoring against the Tomahawks at Wrexham through a Christiaan Roets try.

But the Tomahawks led 8-4 at the interval following tries from Clint Newton and Matthew Petersen.

Harris's side responded with a spell of sustained pressure early in the second half but failed to turn their advantage into points.

That proved costly as a second try from Newton and scores from Tuisegasega Samoa and man-of-the-match Joseph Paulo saw the Tomahawks secure victory, despite a late Welsh rally.

"We probably took six or seven wrong options in that early stage of the second half," Harris added.

"We just needed to break the back of them early in the second half and we would have kicked on from that.

"We picked a lot of wrong options and ultimately that comes down to a bit of quality in our group and some areas where we need to work on.

"With World Cups you don't get two, three, four, five weeks to work on things.

"Unfortunately we're wounded now and we've got to make sure we come back stronger in our last game."

Wales face the Cook Islands in their final World Cup group game in Neath next Sunday.