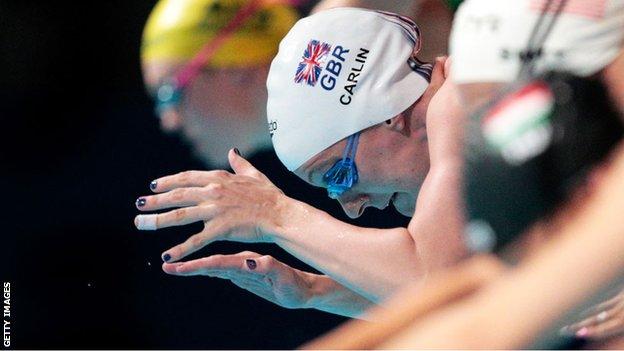 The Swansea-based freestyle swimmer won a silver and a bronze at Delhi in 2010 and hopes to go one better in 2014.

"There's still one medal that I'm missing and I'm definitely shooting for that," she said.

Carlin, 23, was named on Tuesday in an initial seven-strong Wales swim squad for Glasgow.

The other swimmers in the team are Jemma Lowe, Georgia Davies, Thomas Haffield, Robert Holderness, Ieuan Lloyd and Marco Loughran.

"I think we've got a great team," added Carlin.

"We've got a mixture of Olympians, and medallists at Commonwealth and Europeans and world Championships.

"With the team that's been selected so far it's really strong and obviously we've got other selection meets to add more people onto the team.

"There's going to be some young ones who come on to the team so I think it's going to be a great mixture and obviously we'll be pushing for the medals and hopefully the Welsh swimmers are going to be on top."

Carlin made her Commonwealth Games debut as a 15-year-old at Melbourne in 2006.

Her success in Delhi hinted at a big future, but a bout of glandular fever in 2011 wrecked her chances of competing at the London Olympics in 2012.

That was followed by further disappointment at the world championships in 2013 when she missed out on a medal.

She plans to compete in the 200m, 400m and 800m events in Glasgow and has been training at altitude in Spain to improve her stamina.

"I still feel fresh, I still feel as though I can do best times and push on to be the best in the world," added Carlin.

"I want to be at the top and it would be really special with it being in Glasgow and part of the Welsh team as well and hopefully the Welsh swimmers can get loads of medals."