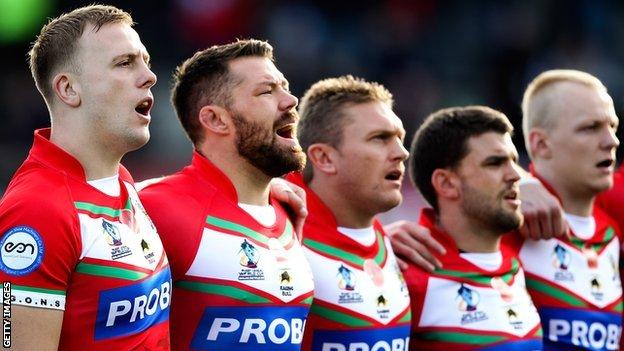 Wales rugby league coach Iestyn Harris is optimistic about his team's future despite a ensuring his side lost all three games at the 2013 World Cup.

Wales fought back from 22-4 down, but the Cook Islands held on for a first World Cup win in six attempts.

The Dragons had already lost to Italy and the United States at the World Cup.

"Our pack is very good and solid, and within the next four years they are going to be formidable," said Harris.

Everyone gave 100% effort, and as a coach that is all you can ask of your players

"It is about going away from the World Cup and seeing what we have to do to improve.

"We are doing a lot of work with our youth policy, so there is a lot being done.

"Hopefully, over the next three or four years, we will see the fruits of our labours come through."

But Harris, who is the assistant coach at Super League side Wigan Warriors, hinted he may not be the man to see that process through.

"Whether it is me or whoever else does the work over the next three or four years, it is about getting the players used to that type of intensity and being comfortable with it," he said.

"We have got some very good quality, we probably just needed a little bit of direction throughout the World Cup.

"We lacked that one dominant person to steer us around the field, but that is not a negative against anyone because they did absolutely everything they could do to be at their best."

Harris admitted Wales' efforts in Neath on Sunday were at times frustrating and mirrored their overall performance in the tournament.

"We dropped a lot of ball, which has probably been a little bit the story of our campaign," said the former dual-code international.

"I would like to thank everyone in the camp, and certainly the semi-pro guys. It is a lot to ask for those guys.

"Obviously we are disappointed. We wanted to get through to the quarter-finals, although we knew it was a difficult task because we were against three very good teams.

"But everyone gave 100% effort, and as a coach that is all you can ask of your players."

Cook Islands coach David Farleigh was delighted at their win, and said: "It is good we have finished on a winning note.

"We were disappointed losing against America, it was a game we should have won, and then we missed a couple of opportunities against Tonga.

"There was some really bad defence by us in the second half, but today was our day.

"It is a big day for the Cook Islands, their first win in a World Cup."