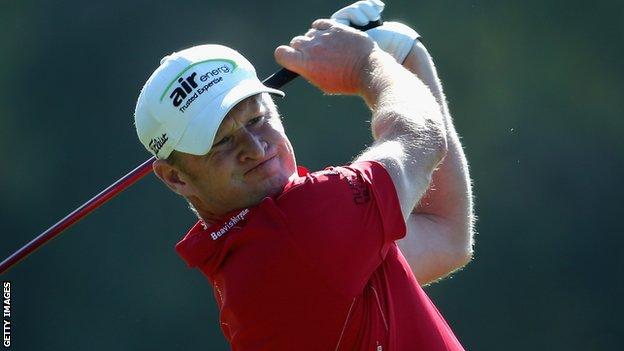 Jamie Donaldson says he is not thinking about securing a place in the European team at the 2014 Ryder Cup.

Donaldson, who finished second in the Turkish Open, is currently fifth on the European Tour's order or merit.

The 38-year-old is competing in the final event of the European Tour season, the DP World Tour Championship, which started on Thursday in Dubai.

"I'm not really thinking about it," Donaldson said of next year's Ryder Cup at Gleneagles.

"Obviously it's something that I would naturally love to play in but all I can concentrate on is playing one week at a time," Donaldson said.

"I will need a lot of very good performances and wins are the most important to get into that team."

Pontypridd-born Donaldson finished second at the Turkish Open, with his hole-in-one on the 16th earning him a prize of a million air miles.

A top-two finish in Dubai this week could see the Welshman top the European order of merit.

And Donaldson said he was delighted with his performance in Turkey, given his recent schedule.

"I played well pretty much all week," Donaldson said.

"I've played a lot of golf over the last couple of months and after this week it will be seven tournaments in eight weeks, which is quite a lot for me.

"I was getting quite tired at the start of the week so to finish where I did and how I did was great considering I'd thought I had run out of steam."

Donaldson could be the only Welshman on next season's European Tour with former Ryder Cup player Phil Price out of the qualifying school.

Bradley Dredge and Rhys Davies are two Welsh players who have lost their places on the Tour in recent years while Ian Woosnam now competes on the Senior European Tour.

And Donaldson is concerned at the lack of younger Welsh players emerging.

"We've not many young guys coming through on the tour at the moment," Donaldson said.

"I'm sure there's a lot of good players playing top level amateur golf and playing lower-level pro golf that I'm sure are just around the corner.

"It won't be long before there will be quite a few Welsh golfers coming through I believe.

"Obviously Woosie [Ian Woosnam] is on the seniors now and he was on the tour for a long time and was obviously the most successful Welsh golfer.

"There were quite a few lads playing for long periods of time.

"It's just that all the lads that played for many years have all finished around the same time."