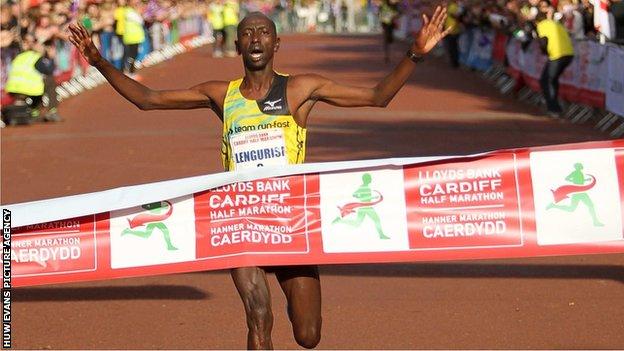 Wales has won the right to host the International Association of Athletics Federations' World Half Marathon Championships in Cardiff in 2016.

The Welsh capital city's annual half marathon was held on 6 October and for the first time incorporated the British Half Marathon Championships.

The World Half Marathon Championships will take place in March 2016 and be open to elite and amateur runners.

"This is a coup for Cardiff and Wales," said Welsh Athletics CEO Matt Newman.

"It is a huge endorsement of the excellent work that has been put into the Cardiff Half Marathon over the past decade."

The event is the first of its kind to be staged in Wales and elite athletes will use it as part of their preparations for the 2016 Olympic Games.

"It is a major achievement for a small nation like Wales to be able to win an IAAF major championship event and our successful bid proved the power of the partnerships we have been able to build in recent years with the Welsh Government and Cardiff Council. Both agencies were vital parts of our bid," Newman added.

"Now we have less than three years to prepare for one of the most prestigious sporting events ever staged in Wales and we intend to make it one to remember."

It will be the fourth time the race has been run in the United Kingdom. South Shields staged the inaugural Championships in 1992 and it has also been held in Bristol in 2001 and Birmingham in 2009.

Steve Jones, former marathon and half marathon world record holder, said: "Having seen the Cardiff Half Marathon first hand over the last two years, I am excited to see what the world's best athletes will able to produce on such a flat and fast course.

"This race will be a real treat for the tens of thousands of knowledgeable sports fans who live in Cardiff and the many more throughout Wales who I am sure will flock to see what promises to be a spectacular event."

Kenyan Loitarakwai Lengurisi won this year's Cardiff Half Marathon in a new course record of 61 minutes and 51 seconds, with compatriot Purity Kimetto winning the women's race in 1:14.22.