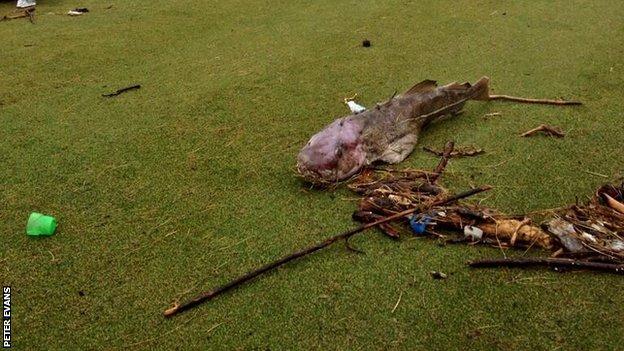 The Royal Porthcawl Golf Club say it will recover from the recent storms in time to host the Wales' first Senior Open in July.

And secretary Michael Newland expects the course to be fit to host one of golf's most prestigious events.

"It has recovered pretty well, actually," said Newland of the course on the south Wales coast.

A dead cod was among the debris blown on to the course amid the recent bad weather.

Newland praised the course's staff for their efforts in clearing a variety of flotsam from the greens and fairways.

He added: "The green staff have worked exceptionally hard to clear most of the debris.

"So if you look down the first, the left-hand side, which has got pretty well battered by the weather, is near enough clear now.

"The whole team worked really hard to sweep, blow and clean to get it off the green."

Jiménez, who is already the European Tour's oldest champion, is aiming to become Europe's oldest Ryder Cup player by earning a place in Paul McGinley's team at Gleneagles in September.

He will make his debut in the 2014 Senior Open Championship between July 24-27 having been a Ryder Cup player four times, the last in 2010 at Celtic Manor Resort, Newport.

While Newland admits the recent bad weather has had an impact on the course, but has no fears about it being ready for the visit of Jiménez and his rivals.

"Speaking to members who have been here for a long, long time...they have never seen anything like it," said Newland.

"I think we can get the course back very quickly.

"Having someone of his stature confirmed is great news for the tournament, the club and Wales."