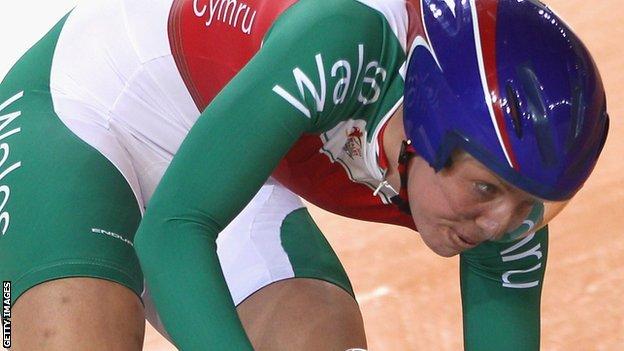 With six months to go until the Commonwealth Games start in Glasgow, BBC Wales Sport looks at six sports in which the Welsh team hope to make a mark.

They aim to win more from Glasgow, with the official target expected to be announced in February.

Some teams have yet to be finalised but here is a look at six sports where Wales hope to be on the podium.

Wales could have an extremely strong contingent for the triathlon with the prospect of securing a medal on the first morning of competition.

Non Stanford, the current World Triathlon champion, which she won in her first senior season in 2013, is one of the clear favourites for the women's race on 24 July.

The 25-year-old is focused on her Commonwealth bid and training in Leeds with the Brownlee brothers - Olympic champion Alistair and his younger brother Jonny, who won bronze at London 2012.

Jenkins, who was born in Scotland but lives in Bridgend, is not certain of competing in Glasgow having not raced since the London Olympics because of a knee injury.

If two world triathlon champions was not enough for one team, Wales could also have the 2002 champion competing in Glasgow.

Leanda Cave, the 2012 World Ironman Champion was a triathlon silver medallist at the 2002 Commonwealth Games in Manchester and has stated her desire to compete in Glasgow.

If all three make it to Glasgow, team orders might come into play with potential for one or two of these world champions are asked to support one of the others' bid for gold.

These Commonwealth Games will also see, for the first time, a mixed relay event, with two men and two women completing a 'super sprint' triathlon of swimming, biking and running. The strength of Wales' women should bode well for this.

Dai Greene will be defending the title he won in Delhi in 2010 in the 400m hurdles.

But since then injuries have hampered the former World champion, most notably in 2012 when he finished a disappointing fourth in the Olympic final.

Another big hope for a medal is Aled Sion Davies, the 2012 Paralympic discus champion.

His event, the F42/44 discus is included despite being dropped from the Paralympic schedule for Rio 2016. Davies, who is also world champion, will be hoping for further success in Glasgow.

Christian Malcolm won 200m silver in his first Commonwealth Games in Kuala Lumpur in 1998 and is set to compete for the last time in a Wales vest in Glasgow.

The 34-year-old won a bronze medal in the 200m in Delhi but is likely to be up against Jamaican sprint king Usain Bolt, who has picked the 200 as his event of the Games.

The boxing team, which secured three medals four years ago, is likely to be without two of its strongest boxers in Glasgow.

Olympic silver medallist Fred Evans and European champion and world number one Andrew Selby will be prevented from competing after joining the AIBA Pro Boxing competition.

Both are still eligible for the Olympics but there is no provision allowing them to compete at the Commonwealth Games.

Even without Olympians Evans and Selby, Wales would still have a defending Commonwealth champion in their ranks.

Sean McGoldrick originally won a bantamweight silver medal in Delhi, but was upgraded to a gold medal when Sri Lanka's Manju Wanniarachchi failed a drugs test.

Swim Wales head coach Martyn Woodroffe has hailed the swimming team for Glasgow as the "strongest ever" as they look to improve on the four medals won in Delhi.

Jazz Carlin won two of those medals - a silver and bronze - and will be Wales' main hope for gold now David Davies has retired.

The 23-year-old is rejuvenated following the disappointment of missing out on the Olympic Games in London two years ago,

In December Carlin set a new Welsh record in the 800m freestyle, the event in which she will compete along with the 400m freestyle in Glasgow.

Two bronze medallists from four years ago, Georgia Davies and Jemma Lowe, have already been named in Wales' elite list of swimmers.

Also on the list are Ieuan Lloyd (200m individual medley) and Marco Loughran (backstroke), who both competed at London 2012.

A talented cycling team competing in the Sir Chris Hoy Velodrome and on the road will be headed by double Olympic champion Geraint Thomas and double world champion Becky James.

Since winning a silver and bronze four years ago, James became a double World Track Cycling champion in 2013.

The Abergavenny sprinter won a silver medal in the sprint and a bronze in the 500m time trial in Delhi and will compete in both again in Glasgow, with her first race, the time trial, on day one.

The 27-year-old, a bronze medallist at Melbourne in 2006, says he is committed to the Commonwealth Games despite coming so soon after the Tour de France.

On the road Thomas is likely to be up against Team Sky team-mate Sir Bradley Wiggins in the time trial and competing against the Isle of Man's Mark Cavendish in the road race.

That longer race is likely to be Thomas's priority, on the final day of competition on Sunday 3 August.

Thomas believes the Welsh team has enough strength in depth to mount a serious challenge in Glasgow.

Weale won the men's singles in Delhi four years ago and was a men's fours winner the last time the Games were held in Scotland in 1986.

The 50-year-old, also a three-time silver medallist and a bronze medallist, will be competing at his eighth Games this summer.

The squad of 15 bowlers range in age from 25-years-old to 71 with half of the squad making their Games debut.