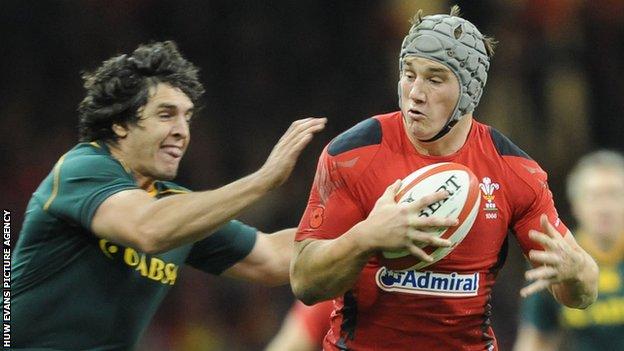 Wales and Lions centre Jonathan Davies could be fit to play for Wales against Ireland on 8 February.

Coach Warren Gatland has released the 25-year-old back to the Scarlets who play London Irish in the LV= Cup on Saturday afternoon.

Davies has not played since suffering a pectoral muscle injury in Wales' defeat against South Africa in November 2013.

"Jonathan Davies isn't too far away so we've released him to the Scarlets for a match this weekend," said Gatland.

"We've been keeping a close eye on him.

"We were comfortable that if he was going to keep making the progress he was making, he could play this weekend and hopefully get through that and be in contention for the following week."

Davies' recovery is ahead of schedule, with initial reports suggesting he would miss most of the Six Nations Championship.

Davies could be joined by triple Grand Slam winner Gethin Jenkins on the available list for Wales' visit to the Aviva Stadium in Dublin.

The Cardiff Blues prop has been rested for the opening game of the tournament against Italy in Cardiff on Saturday after struggling to recover from a knee injury.

Bath loose-head Paul James will start against Italy, with Gatland expecting to have a fit squad with competition for places by the time his team face the tough challenge of Ireland.

"Gethin Jenkins was fit and available for us," he said.

"It was a week when he [Jenkins] just needed a little more conditioning because we felt with him in the past he's struggled to get through the tournament, and we didn't want him sort of breaking down in the first week so we can have him back fit and available."

Gatland may have to make a change in the back row of the team he has selected to face Italy, with Dan Lydiate flying back to Paris on Tuesday to be with his partner who has gone into labour with the couple's first child.

If Lydiate is not available, Sam Warburton will come off the bench and to play six.