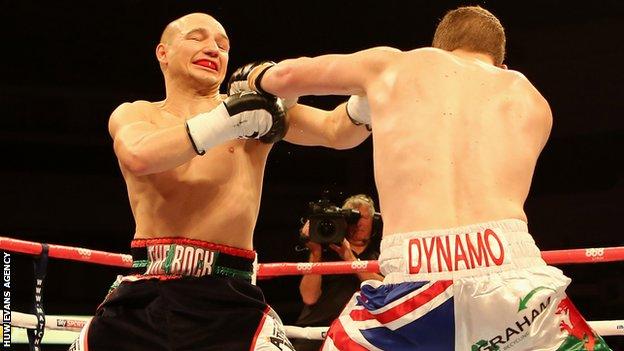 Rees, 33, and Buckland fought out a thrilling and at times brutal 12-round British lightweight title eliminator at Cardiff's Motorpoint Arena.

"I'll have to go home and see what I'm doing first with my career," Rees said.

Gavin Rees is a true champion and he pushed me all the way... it was a split decision and it could have gone either way

Also fighting in Cardiff on Saturday was featherweight Lee Selby, who was defending his British title and fighting for the vacant European title against Leicester boxer Rendall Munroe.

Selby, 26, from Barry in south Wales, was on his opponent from the first bell, picking off Munroe with accurate shots to head and body.

The Welshman's dominance saw the referee step in and end the fight in the sixth round as Munroe struggled to cope with the pace set by Selby.

Selby is following in the footsteps of great Welsh featherweights such as Jim Driscoll and Howard Winstone, and a shot at a world title cannot now be too far away.

While Selby impressed in his victory, the fight of the night belonged to Rees and Buckland.

Rees started brightly and opened a cut above his opponent's right eye in the first round, as well as testing Buckland with some heavy body shots.

But Buckland, who had stepped up a weight after losing his British super-featherweight title to Stephen Smith in August, survived that early test and came back strongly.

Both men, friends outside the ring, knew that defeat would leave their career hanging in the balance and that fate, coupled with their natural bravery, saw them go toe to toe for the rest of the fight.

The judges' scores could not have been closer but it is Buckland who will advance for a shot at British champion Martin Gethin, while Rees considers his next step.

Buckland indicated he would consider a rematch, and given the appreciation of a packed audience after the thriller it would not be a hard fight to sell.

"Gavin's a true champion and he pushed me all the way, and I think I pushed him," Buckland told Sky Sports.

"It was a split decision and it could have gone either way, but I'm happy."

Rees was stopped by Adrien Broner for the WBC Lightweight crown in February and lost to Anthony Crolla in June, and now has the defeat to Buckland as the fourth loss of his 42-fight career.

"I just couldn't get going the first six rounds but I think I came back quite well," Rees told Sky Sports.

"I pushed it towards the end there and it was a cracking battle and it could have gone either way, but the judges scored it for the other guy so he's the winner."

There was an impressive performance on the undercard from heavyweight Anthony Joshua in his fourth pro outing.

The 2012 Olympic gold medallist made short work of Welshman Dorian Darch, stopping his opponent in the second of six scheduled rounds.

Also fighting in Cardiff was Welsh welterweight Dale Evans, who dug deep to edge out Erick Ochieng 77-76 over eight rounds.