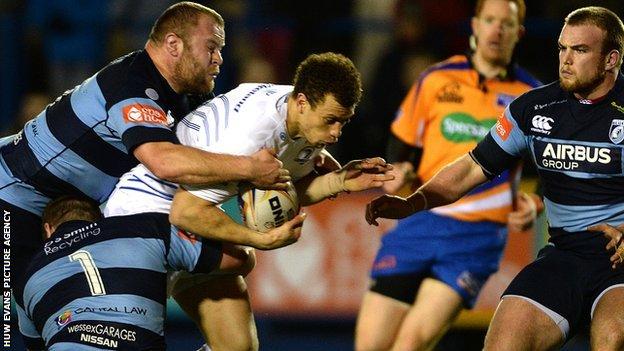 Dan Fish struck back with a well-worked try, but the hosts fell to their seventh defeat in eight games.

Conan, 21, had a dream start to his senior career as he pounced on a lose ball from a scrum to be awarded his debut score by television match official Paul Adams.

New Zealander Gopperth kicked the first of his conversions of all Leinster's tries and when hooker Strauss touched down before the first quarter was over the signs seemed ominous for Phil Davies' hosts.

Six Nations calls by Wales and Ireland depleted both squads.

But the Blues could not match Leinster's strength-in-depth and it showed at the scrums almost throughout the contest.

Despite that disadvantage, the hosts were able to restore some pride following a disappointing defeat by Glasgow with the manner of their performance.

Fly-half Gareth Davies and full-back Dan Fish stood out for the hosts with their incisive attacking vision.

Fish's pace on the counter-attack was a highlight of the night.

Wing Owen Jenkins - son of ex-Wales hooker Garin - kept a move alive on the left with an intelligent in-field step to help pave the way for Gareth Davies to cut through for his score.

The fly-half converted, but Gopperth's penalty gave Leinster a 17-7 lead.

Ireland squad member Copeland burst through the first line of defence, but ignored a two-man overlap before being dragged down.

A superb Fish break ended with Leinster lock Tom Denton illegally handling the ball in the tackle, earning him 10 minutes in the sin-bin.

From a scrum that followed, under-powered Leinster were punished as hooker Dacey touched down.

A Davies penalty early in the second half gave the Blues more hope.

Fish got his reward as the hosts battled on. But Davies' conversion of the 61st-minute try was the night's final scoring act.