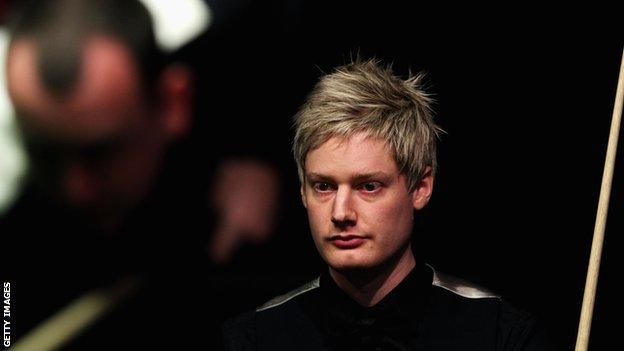 Mark Williams knocked world number one Neil Robertson out of the Welsh Open 4-3 to go through to the fourth round.

The Australian then took a 2-1 lead after Williams took six shots to get out of a snooker.

But Welshman Williams recovered to take the next two and held his nerve with a break of 48 in the decider. He plays Marco Fu next.

"Any victory is good, but over the world number one is even better," he said.

Robertson's second frame clearance aside, both players struggled to construct large breaks, Williams even punching the table in frustration after missing an easy red in the fourth.

The last few frames were characterised by extended safety exchanges and could easily have gone either way but it was Williams - who won the tournament in 1996 and 1999 but last reached the final in 2003 - who progressed to the fourth round in Newport.

Having struggled for form in recent seasons, the 38-year-old said the win over Robertson - the 2010 world champion - has boosted his confidence for the rest of the tournament.

"It's got to be up there for me because I haven't done anything for the last few years," he said.

"After you beat Neil Robertson it proves you can still beat [top players]. I'm still more than capable on my day.

"I'm over the moon with that and hopefully I can just keep it going."