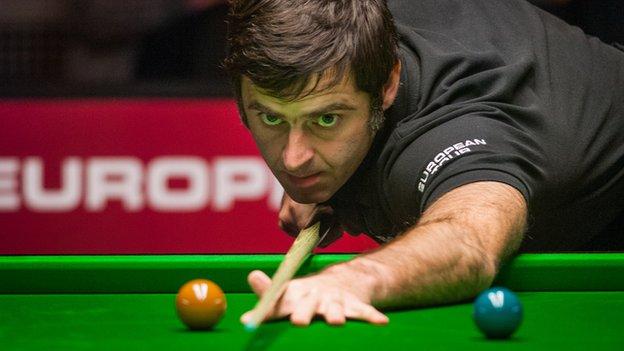 World champion Ronnie O'Sullivan saw off China's Xiao Guodong 4-1 to set up a last 16 clash with Ricky Walden at the Welsh Open in Newport.

O'Sullivan opened with a century and though Xiao levelled with 59, the 'Rocket' powered through, helped by 54 and 78 in the last two frames

He will now face Ricky Walden, who beat Anthony Hamilton 4-2.

Judd Trump made short work of Scotland's Anthony McGill, winning 4-1 and finishing with breaks of 73 and 53.

Four-time world champion John Higgins set up a last-16 clash with Trump after a comprehensive 4-0 win over Mark King, with breaks of 55, 66 and a closing 137 as King scored only 15 points in the match.

Matthew Stevens lost in a deciding frame to Joe Perry while Shaun Murphy was another notable casualty, beaten 4-3 by Liang Wenbo, with the Chinese player coming from 3-1 down with breaks of 55, 81 and 52.

Stuart Bingham made 102 in the fourth frame of his 4-2 win over Michael Holt and will face Perry while Barry Hawkins recovered from 3-1 down with breaks of 74, 134 and 50 to beat Jack Lisowski 4-3 and set up a clash with Liang.

Marco Fu set up a showdown with home favourite Mark Williams after beating Graeme Dott 4-2 with a top break of 84 and last year's finalist Stuart Bingham made top runs of 61 and 102 as he beat Michael Holt 4-2.