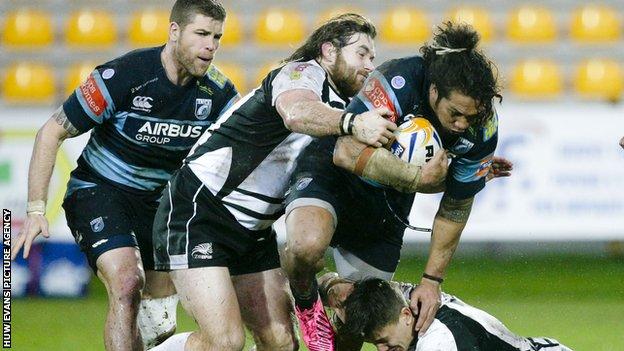 Bottom side Zebre completed the double over Cardiff Blues in the Pro12 with a 15-10 win in Parma.

Tom Williams crossed for the Blues and wing Harry Robinson had a score ruled out by the TMO right at the death.

The Blues, now ninth in the table, lost 25-30 at home to the Italians in September.

After getting off to a poor start in Italy things went from bad to worse for the Welsh Region as flanker Rory Watts-Jones was sent to the sin-bin.

Blues full-back Tom Williams failed to collect a chip kick by hooker Luigi Ferraro and the winger pounced to put the home side 12-3 ahead.

The Welsh side could have been even further behind had Haimona not missed three penalty kicks for Zebre beforehand.

The Blues also failed to take advantage in attack when Zebre were reduced to 14 men after Filippo Ferrarini was yellow carded for collapsing a maul.

After the break Phil Davies' side improved and full-back Williams scored a try following a period of pressure to bring Cardiff to within two points of the Italians.

Luciano Orquera also had trouble with the boot missing another penalty chance for Zebre but made no mistake on 65 minutes from 30 metres out to give the Italians a five-point lead.

The Blues keep going and were unlucky not to at least draw level in the closing stages.

Five minutes from time Dan Fish's cross-kick looked to have provided them with a certain scoring opportunity only for an accidental offside to kill the attack with the try-line beckoning.

With the final play of the match Robinson thought he had scored for the Blues only for the try to be controversially ruled out for an obstruction earlier in the move by the TMO.

It is the first-time Zebre have done the double over a team in the Pro12.