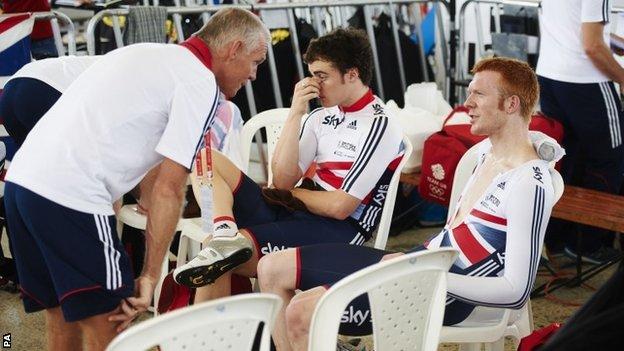 Welsh cyclists Owain Doull and Sam Harrison were part of the team, alongside Ed Clancy and Jon Dibben, which finished eighth in Colombia at the end of February.

Britain's men failed to win a medal for the first time since 1998.

"I think the work ethic wasn't there," Sutton said.

"They exposed themselves in the sense they didn't do the work and then they failed. I'd say they let themselves down.

"As far as I can see the responsibility lies with them because we had probably the best staff and model, service provision, science support and coaches."

Britain's women performed better at the World Track Championships, returning with a haul of five medals.

Two of those were won by Wales' Becky James, who secured a bronze in the keirin and in the team sprint with Jess Varnish.

James, who earned two golds amid a total of four medals at last year's World Track Championships in Belarus, lost her keirin title to Kristina Vogel.

But former Welsh national cycling coach Sutton insists the 22-year-old from Abergavenny has not regressed over the past last year.

"I can guarantee you that Becky is where she was 12 months ago," the Australian told Radio Wales Sport.

"She's had a lot of life experiences over the last 12 months and I think that's all part of her development growing up.

"Managing expectation? I think she's done that very well. I always thought she might struggle with that.

"I'm totally confident in Becky we've got the real deal."