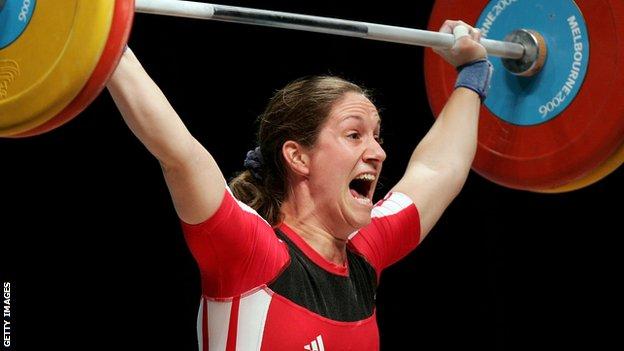 Welsh weightlifter Michaela Breeze has hit the A standard to qualify for the Commonwealth Games in July.

The 34-year-old lifted a 93kg British-record snatch at the Welsh senior weightlifting championships in Cardiff.

In December 2013 she announced she was coming out of retirement in a bid to compete in Glasgow.

Breeze, who won gold at the 2002 and 2006 Games, captained the Welsh team in Delhi four years ago, winning silver in the 63kg category.

She was convinced to make a comeback after lifting 45kg more than the Commonwealth qualifying standard when she was called into action to help Wales at the Celtic Championship in December.

Fellow Welsh lifters Stephanie Owens and Christie Williams have also made the A standard for Glasgow in their categories.

Weightlifting Wales performance director Simon Roach says he is delighted with the progress being made by Welsh weightlifters.

"We already have more lifters making the A standards than we had in the previous Commonwealth Games," said Roach.

"Michaela is making progress in every competition and another British record is an outstanding achievement. We have an excellent group of female lifters who are really fighting for places."