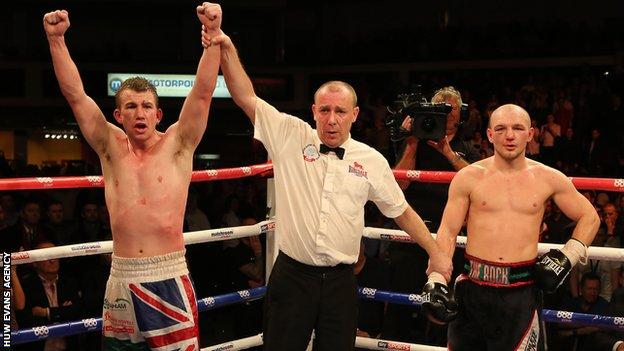 Rees, 34 in May, said he might retire after losing a split decision in the British lightweight title eliminator.

But trainer Gary Lockett says former WBA light-welterweight champion Rees will soon be back in the ring.

"He's been in [training] the last two weeks, he's got a fight coming up not too far away," Lockett said.

"There's going to be an announcement about that [on Thursday]... so you'll know a little bit more then."

Buckland had said after his victory that he would consider a rematch, although the win over Rees should have booked the 27-year-old a shot at British champion Martin Gethin.

Rees was stopped by Adrien Broner for the WBC Lightweight crown in February and lost to Anthony Crolla in June, and now has the defeat to Buckland as the fourth loss of his 42-fight career.

But Lockett believes the split-decision in a thrilling contest should have gone his fighter's way, so another all-Welsh clash between the two men would seem an enticing prospect.

"Obviously the last fight he lost on points. We don't believe he lost the fight and I don't think I've spoken to one person who does believe that," added Lockett, a former WBU middleweight champion.

"In saying that I don't want to show Gary Buckland disrespect because he's a lovely kid and it was a hell of a fight, which has got to be fight of the year.

"I think a draw would have been a more fair result but if anyone deserved to win the fight then I think it was always going to be Gavin.

"We have to put that behind us now and just move on with his next fight.

"He's a fighting man, he loves to box... him and Enzo Maccarinelli, it's good to have them in the gym for the guys to look up to and to aspire to."

It will be Braehmer's first defence of the WBA belt he won in December.

"I don't think Enzo is going over there with the intention of winning on points," Lockett said.

"He's always been a big puncher and it's in his mind that he's going to put the pressure on Braehmer and either knock him out or make him quit.

"One way or another Enzo is very, very confident he's going to go over there and do the business."