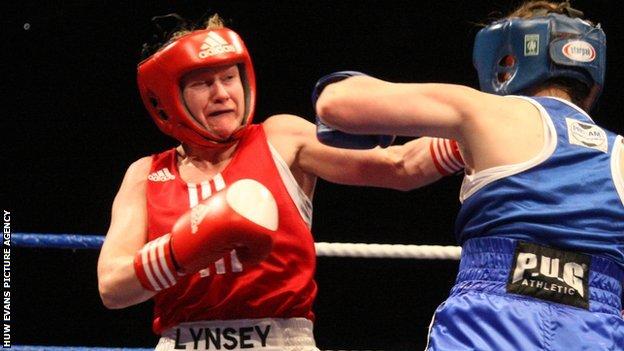 Boxer Lynsey Holdaway lost on a split decision to 51kg rival Ashley Brace at the Welsh Elite Boxing Championships in Cardiff on Friday.

Merthyr Tydfil's Holdaway had hoped the fight could be a springboard to 2014 Commonwealth Games success in Glasgow.

But the 2011 European Championships silver medallist was pipped to the Welsh title by her rival from Torfaen.

Speaking before Friday's bout, Holdaway - who also took bronze at the 2013 European Championships, had said: "There's not much competition around Wales for me in the female category at the lower weight, but this year I've got quite a decent opponent so it's going to be a pretty good match.

"Ashley's a pressure fighter; she likes to come forward. We know a lot about each other so that's why it's going to be an interesting match."

Prizefighter's Kevin Evans stopped Aled Diplock (Merthyr Ex-Servicemen's) in the third round of their 91+kg final.

The Championships are the precursor to Wales selecting its boxing squad for Glasgow, which is scheduled to be announced in April.