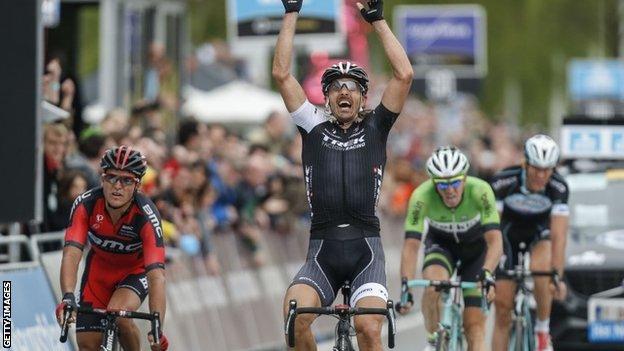 Switzerland's Fabian Cancellara won a thrilling sprint finish to triumph in the Tour of Flanders for a third time.

Cancellara, who won the race in 2010 and 2013, beat Greg van Avermaet and Sep Vanmarcke after a gruelling race from Brugge to Oudenaarde in Belgium.

The 33-year-old becomes just the sixth rider to win the race - one of seven Spring Classics - for a third time.

Team Sky's Geraint Thomas, who crashed early on, was the best British rider in eighth, 35 seconds behind the winner.

"My back's a bit sore after my tumble," the Welshman told his team's website.

"It happened when I was taking a drink, everybody slammed on their brakes in front of me. Because I had a bottle in my hand, I could only grab my front brake and hit a central reservation before falling onto my face.

"I felt terrible for the rest of the race. When you hurt your back you lose a lot of your power and I didn't feel very solid on the bike.

"That said, still being able to finish in the top 10 after all that was pretty pleasing, especially because I almost got off the bike at one point."

The Welshman was in contention for much of the 98th edition of the 259.1km (161 miles) race but could not follow Cancellara when he made his move on the third and final ascent of the cobbled Oude Kwaremont climb with around 17km remaining.

Trek rider Cancellara was followed by Vanmarcke as they set off in pursuit of Belgian duo Van Avermaet and Stijn Vandenbergh, who had made a break some 14km earlier.

Vandenbergh, who was covering Van Avermaet's move in a bid to help his Omega Pharma-Quick-Step team-mate Tom Boonen win the race for a record fourth time, refused to help his compatriot and he was caught on the race's final cobbled climb, the Paterberg.

Van Avermaet was then reeled in on the relatively flat 12km run-in to the finish and all four riders spent the closing stages watching each other's bids for victory.

The quartet almost came to a standstill on the closing straight before Cancellara emerged from the rear in the final 200m to win by a bike length after more than six hours of racing.

"It was man against man, and I just kept pushing," said Cancellara, who is favourite to also defend his Paris-Roubaix title next Sunday - a race he has also won three times.

"I knew I had one card to play: I never attacked, I was mostly on defence, that's why I said 'go with them to the finish and give everything you have'.

"To win in a sprint after the way I won last year [with a solo breakaway] is really special."