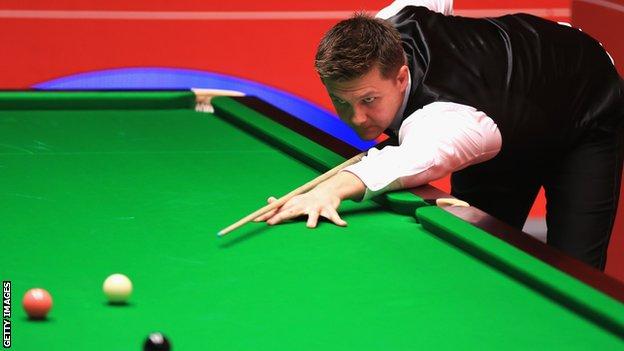 Ryan Day says he will recharge his batteries after winning a last frame shoot-out with Stephen Maguire in the World Championship first round.

The Welshman earned a 10-9 win over world number nine Maguire, who fought back from 6-9 down.

Day, who will face Judd Trump or Tom Ford in the last 16, made a break of 92 in the final frame.

"I've been up here for a week. So I'll go home recharge the batteries and get in some practice," said Day.

"It's probably going to be a fast, free flowing game.

"They both play an attacking style.

"I'm heading home because I don't play until next Saturday [27 April] and spend some time with the family."

Day, 34, said that coming through the World Championship qualifying rounds helped him in his preparations for the Championships.

"The qualifiers were only a few days before the tournament started and I was drawn to play on the first day. So it probably gave me a boost that I needed," he believed.

Day raced into a 6-2 lead and hoped to make it 7-2 against Maguire before being pegged back.

"I thought it was a tremendous match," said Day.

"I played really well in the first session. I was disappointed not to be 7-2 up.

"I know how tenacious Steve is and what a gritty character he is and I knew he was going to fight to the death.

"I was 9-6 in front and he played three really good frames and I was surprised how calm I was in the deciding frame.

"I managed to keep control of the cue ball and my emotions more importantly.

"You probably wouldn't have expected that [a break of 92] in the decider. I hadn't had a shot for pretty much three frames. I was sat in my chair.

"I'm over the moon to finish it off in a bit of style."