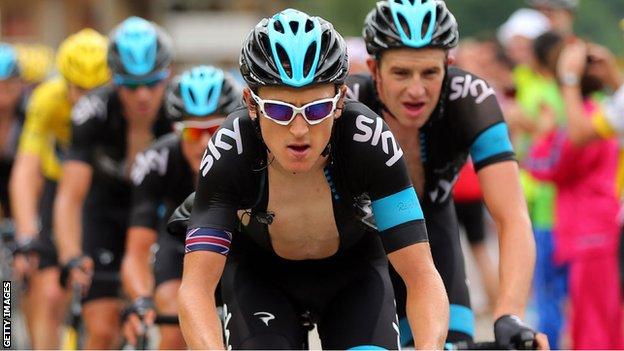 Geraint Thomas has confirmed he will compete in the cycling time trial and road race at the Commonwealth Games.

Welshman Thomas had previously said he would enter the road race.

But he told BBC Radio Wales Sport he would take part in the time trial, which will be held four days after the completion of the Tour de France where Thomas will be competing for Team Sky.

"It'll be a decent hit out anyway before the road race so I may as well do it," he said.

Thomas was a key member of British pursuit teams that won gold medals at the Beijing and London Olympics.

However, he missed the 2010 Commonwealth Games in Delhi, and is keen to represent Wales for the first time in eight years.

"It's never nice to miss a race and especially when it's riding for Wales, which only comes around every four years in my case," added Thomas.

"I haven't ridden for Wales since Melbourne in 2006, so I'm looking forward to it."

His decision to enter the time trial, which will be held on 31 July, as well as the road race two days later will surprise some, with both races coming so soon after the Tour.

Thomas helped Team Sky's Chris Froome to the Tour title in 2014, in spite of suffering a fractured pelvis in a fall.

And he will be a key member of the team trying to guide Froome to a second successive title, with the race ending in Paris on Sunday, 27 July.

Thomas intends to travel to Glasgow the day after the Tour and be back in action again three days later - but admits the Tour is his priority.

"I'm not going to hold back in the Tour and try and save myself for the Commonwealth Games road race," he said.

"I'll still do as much as I can to be ready for it, try and recover well and give it a good hit.

"Sometimes you can come out of the Tour and just feel super for a couple of weeks, so hopefully I'll feel super."